Syracuse Football: Get To Know Your Orange Man - #41 Donnie Simmons

Share All sharing options for: Syracuse Football: Get To Know Your Orange Man - #41 Donnie Simmons

Next up on your Orange-Man Orientation, #41, Donnie Simmons.

2011 Projections: Methinks this year is going to be all about watching and learning for young Donnie. He's got a whole bunch of people pretty entrenched in their positions ahead of him (Chandler, Mikhail, Brandon Sharpe, Torrey Ball...). At 222, he's gonna have to beef up as well to make an impact on the line. This sounds like a special teams kind of season, but there's nothing wrong with that for the freshman.

How'd He Get Here?: As a senior, Donnie recorded 110 tackles, including 70 solo stops, 10.0 sacks, an interception, two passes defended and a pair of forced fumbles. He received offers from two schools, Syracuse and Akron. I kid you not. Guess which one sounded more appealing to him? 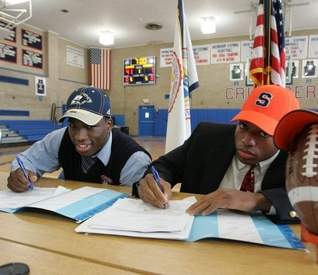 He's the one not in the Akron hat.

Scouts/Rivals Said:Scout gave Donnie the three-star treatment, noting that "with Simmons speed he could very easily make the move to outside linebacker." Rivals went with their usual two-stars.

Money Quote: "Once Doug Marrone came on to the scene, I knew he had a mission for this team to pursue greatness...I’m definitely excited to see what Syracuse’s health program has in store for me. I’m confident I can fill out my frame." - via The Fizz

Links of Wonder: Here's some very positive words from Donnie's high school coach. Not that he wouldn't say positive things...

Doug Marrone Thinks: Nothing specific I could find but here's Marrone on the need to keep NYC talent like Simmons in orange: "It is very important for us as a program to get back the state of New York. We have got to make sure we keep the kids close to home."

Let Us Get A Good Look Atchya: Go Donnie Go!