'Krautman' Is A Dirty Word To EA Sports NCAA '12

Share All sharing options for: 'Krautman' Is A Dirty Word To EA Sports NCAA '12

When EA Sports says he's dirty, it's because just by saying his name you should get your mouth washed out with soap. 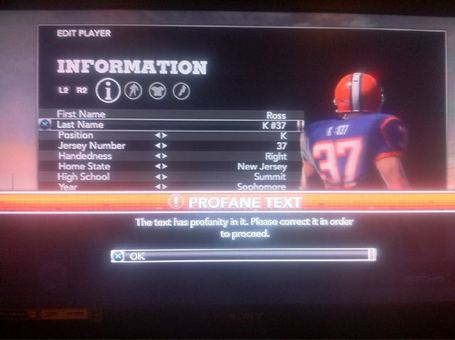 Gino sent in that screenshot when he tried to edit Syracuse K #37's last name to "Krautman." If you can't read that, it says "Profane Text - The text has profanity in it. Please correct it in order to proceed."

I'm assuming the problem they have is with the word "kraut" and not the full Krautman. That or there's a German superhero comic out there called "The Schnitzely Adventures Of KrautMan" and they wanted to head off any copyright infringement issues. God forbid we offend the Germans.

So, you've got some options:

You know which one I'm going with...