Syracuse Football: Get To Know Your Orange Man - #58 Lewellyn Coker

Share All sharing options for: Syracuse Football: Get To Know Your Orange Man - #58 Lewellyn Coker

Next up on your Orange-Man Orientation, #58, Lewellyn Coker.

2010 Stats: Coker played in all 13 games for SU, though primarily on special teams. He accrued six tackles on the year but never more than one in a given game. He was more concerned with knocking the snot out of people than wrapping them up (more on this soon).

2011 Projections: Coker sites at the No. 2 spot at MLB behind Marquis Spruill right now. His odds of supplanting Spruill, who started last season as a freshmen, seem unlikely. Still, there's a lot of flux at the LB position and it's the perfect opportunity for Coker to make The Leap. He made a name for himself in the spring as a big hitter and really stood out in the Spring Game.

How'd He Get Here?: Coker led his high school team in tackles (101) and recorded 265 career tackles to boot. He received interest from Cincy, West Virginia, Louisville and Wisconsin but the Orange were the first to offer and he took us up on it.

Money Quote: "I really like contact...I’m not one to run from contact, so anybody who tries to block me, I usually hit him. I don’t care if they have the ball or not, but I’d rather hit the person with the ball." - Coker on his knack for big hits on special teams.

Links of Wonder: Ever since high school, Coker has been all about the big hits.

Doug Marrone Thinks: "He runs with the second group, sharing time (at middle linebacker) with Malcolm Cater. He was a little further behind coming out of fall camp, but I’ll tell you what: The last three weeks he’s really coming along. He’s starting to read his keys now and trigger better. He is a very physical kid. He’s quick . . . quick explosiveness." - Marrone in October.

Interesting Nugget O'Interest: It's a coincidence that he attended Warren G. Harding High in Warren, Ohio. The town is named after surveyor, Moses Warren. Keep that in your back pocket for when someone breaks out Ohio Trivia.

Let Us Get A Good Look Atchya: Here's Coker taking on John Kinder in the Spring Game... 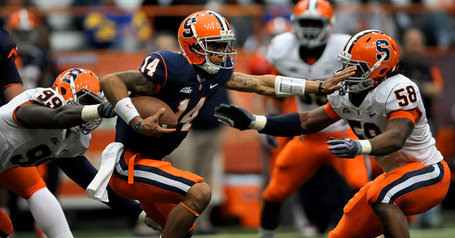