Having taken in the New York State Football Classic (sponsored by Empower FCU - glad to see all my ATM fees are going to good use), Here are my impressions.  I've broken it out into three section - Downstate SU recruits, Upstate SU Recruits and Other Stuff which covers non SU players that stood out to me and some other closing thoughts.

Terrel Hunt: A good runner far to quick to bail on the pocket.  Ran out with trying a pass when he had open receivers multiple times.  He’s admitted as much in an interview with that he had the green light from his high school coach to run whenever he wanted.  Broke off a nice 19 yard run which he later finished off with a one-yard touchdown run.  Had a nice, long TD pass (52 yards) to Brandon Reddish, but other than that I don’t remember him actually attempting or completing a pass.  Speaking of Mr. Reddish:

Brandon Reddish: Reddish was able to get open pretty much at will on deep fly routes, although whether that was a function of his speed or the lack thereof on the DB’s part is uncertain.  As mentioned, he hauled in the pass from Hunt in stride and made it look fairly effortless.  Hard to gauge today’s performance against his Orange future as he’s slated to play DB.  Was an up back on kick returns with Tyree Smallwood and handled kickoff duties after Pat Toole (more on him later) went down after getting crushed on a point after try. 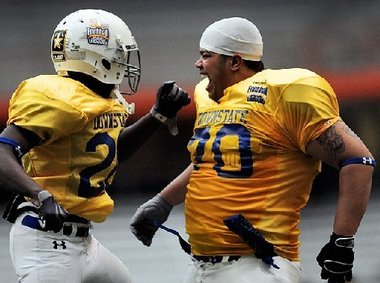 Tyree Smallwood: Handled the opening kickoff, a short pooch kick from Jon Fisher.  Had a couple of nice runs after showing some burst through the line.  Looks to be in the mold of a Prince Tyson Gully.  Got open on a route in the end zone, but Hunt pulled it down and ran.

Ryan Sloan: I did not focus on the linemen as much as the skill players, but from what I saw, Sloan had a nice push on a rush in the first half.  The Upstate line stood him up a few times one on one, and once on a double that I noticed.  Worked down the line once to get into the play, and made a nice move near the end of the game to get a sack.

Ivan Foy: As far as I could tell, he did not play (on defense, which is where I was looking for him).  Heard nothing as to why not.

Ashton Broyld: An absolute beast of a runner.  Has some nice moves, and broke off a 28 yarder at one point to try and keep Upstate in it.  Bailed out of the pocket a lot as did Hunt, although in Broyld’s case it was more a function of run or get killed.  Completed a few short passes, and had a couple more that he short armed and either skipped in or put in his receiver in a position to go down to make the catch and not get yards after catch.

Jon Fisher: Looked better than Raupers did in the spring game, but by how much is hard to tell.  The Upstate long snapper consistently skipped the ball to Fisher who had to scoop it up.  This resulted in a shank.  Fisher’s best punt was about 40 yards.  I think he’ll do ok for the Orange with a little practice and a long snapper than can get him the ball.

Mike Messina: The future Orange laxer was Upstate’s primary kick off return man, and his best effort came on the opening kick off where he went 22, 23 yards.   His abilities as a running back were limited, as he had one run in the 5 yard range and lost yardage most other times.  Left the game at some point in the second half with a shoulder injury, or so the Aquinas folks sitting next to me advised.  I’m sure Desko will be thrilled when he finds out.

Chris Swanson: Swanson is slated to walk on to the team this fall, and had one play where he recovered a fumble where he was Johnnie on the spot.  When I focused on him, he was playing LB despite being listed as an LB.  As an LB, he wasn’t all that effect.  At one point he bounced off the ball carrier.

Jesse Wolf-Gould: Another Orange walk on, I did not see him in the game on the Upstate OL.

Pat Toole: The downstate kicker is Temple bound, if he recovers from the injury he received in this game, they’ve got a hell of a kicker.  He kicks offs were consistently in the end zone, and he nailed field goals of 47 and 43 yards.  Unfortunately, on Downstate’s last TD, an Upstate player came through on the block attempt and crushed him on the follow through.  Josh Thomson reported in his live blog of the game that he could hear Toole’s screaming up in the press box.  Toole left on a stretcher, never something you want to see.

Tyrell Goodman: Goodman was the best QB on the field.  He ran nearly as well as Hunt, and was not as quick to bail out of the pocket.  Ironically, he’s headed to Akron.  Time will tell, but HCDM may end up wishing he’d pilfered this recruit from the Zips as well.

Alex Tibbles: It seemed like I was hearing Tibbles’ name a lot over the PA system.  He was making plays from the line on a consistent basis.  However, since Tibbles is bound for SUNY Canton, I don’t think we need to fret over missing a sleeper.

Donte Colter: Colter ran with power, and is undecided at this point in time.  However, since I can’t find him on Rivals.com, I don’t think this is another case of HCDM missing a diamond in the rough in his own back yard.

Coaching: I thought the Downstate team was better prepared to play, and was more impressed with their "team" feeling.  They had energetic huddles at the start of each half, all went down on one knee when Toole went down, and went out en masse to once he was on the stretcher and ready to be taken off the field.  Granted, there was a clear talent gap as well, but I don’t think Upstate was as ready to play as Downstate.

Broyld, Hunt & the QB Situation: Both of them have work to do before either will be ready to take snaps for HCDM and the Orange, especially Hunt.  Of the two, I’m more bullish on Broyld.  His line was weak, but he hung in better than Hunt did in the face of less pressure.  He’s also an absolute beast.  Big and physical.  Hopefully his legal troubles won’t derail him, as I think he could be a special player.  What he’s not is the starting QB on September 1, 2011, as some seem to think.  I just don’t see it happening. 2012 maybe.