Syracuse Football: Get To Know Your Orange Man - #62 Andrew Phillips

Share All sharing options for: Syracuse Football: Get To Know Your Orange Man - #62 Andrew Phillips

Next up on your Orange-Man Orientation, #62, Andrew Phillips.

2010 Stats: Phillips played in 12 of 13 games, mostly on special teams. He did get one start, stepping into the tackle spot against Louisville.

2011 Projections: Phillips is No. 2 on the depth chart right now at left tackle behind Justin Pugh. He's got a good shot at seeing some solid PT, though Pugh has about a solid a lock on that starting spot as anyone on the team. Dan wasn't exactly blown away by Phillips in spring practice.

Scouts/Rivals Said: Rivals gave him two stars and he received two stars from Scout, who considered him the No. 62 offensive lineman available.

Money Quote: "It was pretty much out of my system after the first two plays. I just kind of let everything go out there. I was really happy about the second play (the knockdown). It gave me the confidence to go out there and play my game." - Phillips after his first start at tackle.

Links of Wonder: Here's an article on Phillips' commitment to SU with quotes from his high school coach.

Doug Marrone Thinks:  "I think it's important that, one, I give credit to the high school coaches in this area for developing those players and, two, I think it's important for someone like Andrew (Phillips) to have the pressure he's going to have playing in his hometown. There is quite a bit of pressure that way. It helps us. I'm excited and the more we can get, the better." - Marrone on Phillips and CBA when he was recruited.

"He really did well. He was tough. He had no real problems. I’m really proud of him." - After Phillip's emergency start against Louisville.

Interesting Nugget O'Interest: As mentioned, Phillips is a Christian Brothers Academy grad. The SU-CBA relationship is one of our most critical for funneling local talent into orange. Other recent CBA grads who have suited up for SU include Greg Paulus, Macky MacPherson and Marcus Sales.

Let Us Get A Good Look Atchya: Phillips got  an up close and personal look in one of the finest photographs of the Doug Marrone Era... 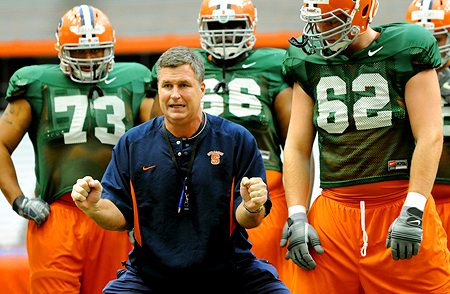