Share All sharing options for: Jonny Flynn & The Shoulder Nugget Of Doom

Former Syracuse Orange Jonny Flynn also became former Minnesota Timberwolf when he was traded by Minny to the Houston Rockets.

For Jonny, it was the end of a turbulent time. The highly-touted Orange guard was basically drafted as a backup plan in case Ricky Rubio decided not to play for the T'Wolves in 2009. That's what happened and Minnesota fans focused their disappointment directly in Flynn's direction. It didn't help matters that his play didn't live up to his draft status and he's basically been on the trading block for three years.

So if anyone needs a fresh start, it's Jonny. He's sorry about the way things went in Minny but excited about the opportunity ahead. So much so that's he's got a veritable chip on his shoulder.

Of course, that doesn't mean one literally has a chip on their shoulder. A chip would be fairly inconsequential. The chip usually represents something huge and weighty.

Not in Jonny's case.

"I have a chip on my shoulder the size of a golden nugget," Flynn said.

Now, it would be one thing if Jonny meant The Golden Nugget Casino-Hotel. That luxury Las Vegas hotel has a total of 2,345 deluxe guest rooms and suites. That would be A LOT OF GUEST ROOMS AND SUITES to carry on one's shoulders. I wouldn't even recommend carrying one guest room or one suite, let alone 2,345.

But Jonny says the chip is the size of a golden nugget, not The Golden Nugget, so we're forced to reconcile the fact that Jonny's burden is a tiny piece of gold. Which looks a little like this: 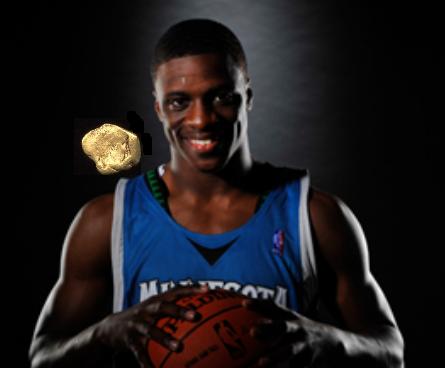 And even then I'm being a littler generous with the size of the shoulder nugget.