SU 'Hoops: One Recruit To Rule Them All

Share All sharing options for: SU 'Hoops: One Recruit To Rule Them All 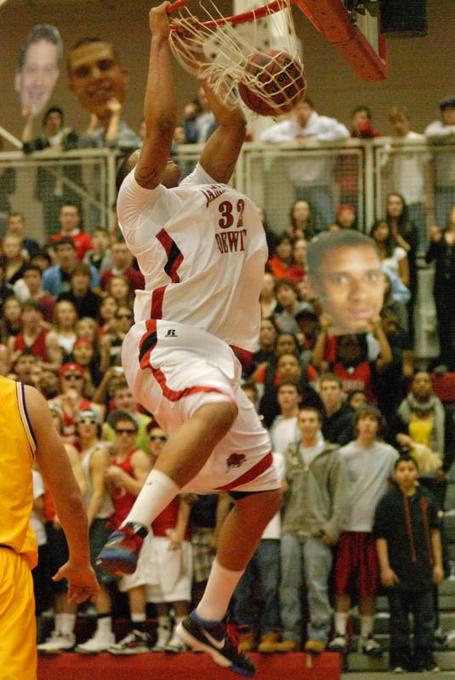 With all this "UConn vindicating the Big East" talk aside, I still can't stomach a third title for Old Man Calhoun...and it's been more than a day now. For all of his wins, Boeheim should out-rank that guy by a least a National Championship or two.

There's an easy way that can happen. And God/Buddha/Chuck Norris be praised! The missing piece is in our own backyard.

You know I'm talking about Jamesville-DeWitt's DaJuan Coleman. Let me get this out of the way: he's not the son of SU-great Derrick Coleman. But he might as well be, says this scouting report (courtesy of Scout.com):

"A true low post prospect, Coleman, at 6-foot-8, 280-pounds, is one of the strongest players in all of high school basketball. He finishes well in the paint and doesn't mind a little contact along the way. He locks up his area rebounding wise and isn't afraid to go outside of it to reel in boards. Coleman has a great set of hands, soft touch around the basket and can get a bucket if he gets it on the block."

He's an automatic double-double everytime he takes the court, so if this Coleman isn't the other Coleman, he's a rich man's Rick Jackson. But don't take my word for it, he'll tell you what he does best himself in an interview with Adidas:

Want more? Of course you do.

Now the tricky part: Is he rated so high (He's the #8 overall player, according to Rivals.com) that Boeheim can't land him? On March 20th, Coleman went for 22 and 16 as J-D won it's fourth straight Class A Championship, so he's no secret to any coach who recruits New York (and good luck finding the coach that doesn't).

Like John Calipari, who took some time off before the Wildcats beat Ohio State in this year's Sweet 16 to watch Coleman in Glens Falls, NY, home of the NY State High School Championships (courtesy of Syracuse.com):

"When Jamesville-DeWitt junior center DaJuan Coleman scored 22 points and grabbed 16 rebounds to help lead the Red Rams to another state title on Sunday, Kentucky basketball coach John Calipari was in attendance. The day after his Wildcats beat West Virginia to advance to the Sweet 16 in the NCAA tournament, Calipari broke away to watch Coleman, one of his top recruiting targets in the class of 2012. 'Kentucky and Syracuse are showing him the most love of late,' Coleman's AAU coach Jim Hart told basketball writer Adam Zagoria."

A riddle? How many NCAA violations will Kentucky incur to pry DaJuan Coleman out of Central New York?

The answer: None. They shouldn't get the chance to.

The kid goes to 6 or 7 SU games a year. He goes to school 15 minutes away. Mind you, it's the same high school Brandon Triche and Andy Rautins both went to. He knows the Orange coaches and players.

This should be a slam dunk for Boeheim. The fact that the kid is so damn talented is a perk, and we can all praise God/Buddha/Chuck Norris that more likely than not, he'll be wearing Orange after high school.