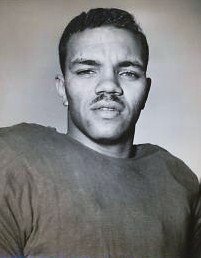 Greetings Syracuse fans! I am a writer with the SB Nation site covering all things Alabama, Roll Bama Roll. A story I'm currently working on for our season preview magazine, Yea Alabama, has led me on a little trip into the Syracuse history books. When Sean didn't immediately have the answer to my inquiry he suggested I whip up a post to share the information I have been able to unearth.

(DISCLAIMER: As an Alabama fan I am obligated to despise any team that sports the color orange. I am able to make a limited exception for Syracuse solely due to the fact Lou Reed went there. So, sha la la la baby.)

As many of you you might know, Alabama and Syracuse last met on the gridiron in the 1953 Orange Bowl. The result was a 61-6 rout which was the largest margin of victory in any bowl game until the 2008 GMAC Bowl (Tusla 63, Bowling Green 7). I became interested in this game not due to the final score but rather due to a tidbit of information I found in E. Cullpepper Clark's book The Schoolhouse Door.

Clark's book is the definitive telling on the turbulent effort to integrate the University of Alabama in the 1950s and 1960s. An ordeal that ended with Alabama Governor George Wallace's infamous face-off with federal authorities in front of Foster Auditorium that has come to be known as "the stand in the schoolhouse door."

According to Clark, during the 1953 Orange Bowl game, Alabama head coach Harold "Red" Drew was under orders from the university administration to take the Crimson Tide team off the field if Syracuse put a black player in the game. Which immediately raised the question "Were there any black players on the Syracuse roster?"

This wasn't an academic point. The Orange Bowl didn't integrate until 1955 when the Nebraska Cornhuskers put two of their black players into the game during the 34-7 loss to Duke. Prior to that time, bowl organizers avoided the issue of integration by simply inviting all-white teams. I was not aware there was an instance of this particular bowl committee instructing an invited team to leave it's black players at home.

The first place I checked was the Orange Bowl game program. There wasn't a photo of a black player which at least suggested there wasn't a starter on the team. But I needed to know to know if that was because there were no black players on the roster for the game or if they were withheld due to the insistence of officials from the bowl committee or Alabama. 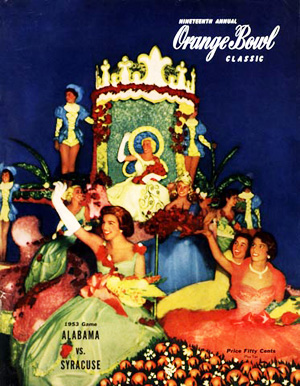 My initial search into the history of Syracuse football provided me the fantastic story of Wilmeth Sidat-Singh who broke the school's color barrier in the 1930s. The next black players that a search gives you are Jim Brown and Ernie Davis. Brown, though, arrived at Syracuse in 1954, a season beyond the game with Alabama. I needed to know if there was anyone on the football squad between time of these legendary players.

So I called up the Syracuse University archives and asked them if there was any black player on the squad prior to Brown. They said they had a picture of Avatus Stone on the pre-season team photo but that he wasn't listed on the roster for the Orange Bowl nor in the game program or what newspaper accounts they had of the contests that season.

And so I set about learning a bit more about this Stone fellow in hopes of discovering the answer. He was, it seems, an amazing, if woefully unappreciated, talent. In fact, it may be that the only reason he's somewhat forgotten is due to the unparalleled ability of Brown and the compelling story of Davis.

Stone was a standout athlete from Armstrong High School in Washington D.C. where he lettered in football, basketball and baseball. He entered Syracuse in 1949 to become the first black player under Coach Ben Schwartzwalder.

A standout quarterback, defensive back and punter, Stone was a force on the Syracuse squad in 1950, his first season on the varsity squad. Although newspaper accounts described his play as "erratic" there is no denying he was a dangerous player when he was on his game.

Against Rutgers that season, Stone boomed a 67-yard punt that stood as a school record for decades. Another Syracuse record was set against Penn State when he grabbed three interceptions – running one back 98 yards for a touchdown and another 85 yards to score. Only two other players have been able to tie that single game total since, Tommy Meyers in 1970 and Markus Paul in 1985.

Stone returned in 1951 and when quarterback Pete Stark suffered a broken leg he was moved to the position making him the only black QB for a major college team that season. The Orangemen promptly went on to three of the final four contests that season. Stone threw a school record three touchdowns against Fordham and his 25.9 yards per completion that day remains 7th on the Syracuse record book.

With all these achievements Stone was expected to have a stellar Senior season in 1952. But two days before the first game he tore the ligaments in his knee in practice and missed the entire season. So when Syracuse announced the roster for the Orange Bowl game, there was not a black player on it.

Although integrated, the Syracuse squad in the 1950s was not equal for black players. Stone was not allowed to eat or room with white teammates and the coaching staff forbid him from fraternizing with white co-eds (who he reportedly dated while at school). When Stone lashed out against these prohibitions he was labeled as a "troublemaker."

Jim Brown, who arrived in Syracuse the season after Stone left suffered many of the same indignities and later recalled the coaching staff admonishing him "Don't be like Avatus Stone."

(In fact, much of the information I found about Stone was from Brown's personal recollections of Syracuse where the older player was invariably cast in a negative light. The infamous allegation Stone was "run off campus" for dating a white majorette seem to come solely from these accounts by Brown. Given the injury Stone suffered his senior season - which would later plague him as a professional player - and the fact he entered the NFL draft after his final season casts some doubt on the claim.)

Despite being sidelined his entire senior season, Stone was selected by the Chicago Cardinals in the NFL Draft on Jan. 22, 1953. Instead of entering the league he signed with the Ottowa Rough Riders of the CFL where he played for three seasons. He earned the Jeff Russel Memorial Trophy as best player in the East in 1955. He was traded to the Montreal Alouettes in 1957 but only played seven games.

In 1958 he signed with the Baltimore Colts and played one game, notching up a single 28-yard punt in a game against the Packers. He retired from football at the end of the season. Stone died of cancer in 2000.