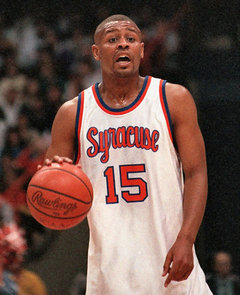 Arian Autry's hiring at Dayton has been "held up in human resources" for a few days now. Looks like its going to be held up in perpetuity now that Autry has accepted the assistant coach position at Syracuse, according to the Washington Post.

Adrian Autry, an assistant coach for the Virginia Tech men’s basketball program, has accepted a similar position at Syracuse, according to a source who has spoken with Autry about the situation but requested anonymity because he’s not authorized to speak on his behalf.

Autry, who previously coached AAU basketball in Northern Virginia and served as an assistant at Bishop Ireton and Paul VI high schools, had been the Hokies primary recruiter for the Washington area.

A hearty welcome home to Red, who will replace Rob Murphy on the staff. Autry's recruiting ties to the Washington area will come in handy as the Orange have become adept at recruiting the Baltimore/DC arena.

It's a reunion of sorts with Mike Hopkins, whom shared the back-court with Autry for three seasons.

As for Allen Griffin, we wish him the best. Option 2 for the position, Griffin remains an assistant at Hofstra.

In case you needed some kind of reminder, Autry was starting point guard for Syracuse all four years of his career, between 1990 and 1994. All Big East First-Team his senior season, Autry is currently No. 5 on the all-time assists list, No. 18 on the all-time scoring list and No. 11 on the all-time three-point shooting list. Scoop, Brandon, Dion and Michael are in good hands.