Share All sharing options for: No. 4 Syracuse Orange (10-1) vs. Hobart Statesmen (5-6) GameThread 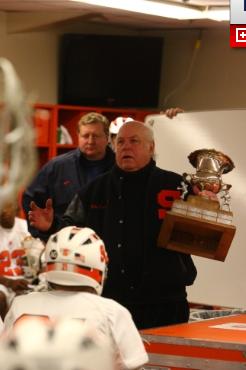 Let's keep it that way.

Syracuse takes on Hobart tonight in the Dome at 7 p.m.What the rivalry lacks in even-ness, it makes up for in years. This will be the 97th meeting between the two schools. The Statesmen are the Orange’s oldest rival as Hobart was SU’s first-ever varsity lacrosse opponent back on April 26, 1916. Hobart won that game 9-1 and we've been exacting revenge ever since.

The game will be broadcast locally on Time Warner Sports and on the radio on WTKW 99.5 FM. Otherwise, Orange Access time for you.

Glaude has your preview. The only thing left to do now is wait and see what color combination Syracuse wears tonight.

Leave your pre-, in- and post-game comments below.