Here's some final news and notes on this weekend's Spring Game, in which we found out that we are better in white jerseys than in blue ones (which makes sense given last season's home record).

First off, great recap by Dan Lyons as well as a fantastic photo essay of the big day (and a Lil' Orange) by Pinker. Make sure you check those out.

Attendance came in at 4,206, which is lower than it was last year and almost 1,000 less than Marrone's first year. I guess we can surmise that spring game attendance is what it is. So be it. Folks had fun, that's what counts.

The star of the day was Antwon Bailey and I think almost every Syracuse fan out there is excited about that. We know Bailey was a fantastic RB 1B, but we weren't 100% if he was ready to be RB 1. We are now.

"Our running backs have to be attackers. We’re not one of those teams that’s going to go out there and spread out. We’re a smash-mouth, two-back, nasty-offensive-linemen kind of team. That’s the way we’ve got to play."

Thank God I never played Little League with Antwon Bailey. I just don't know what I would have done if he's hit me at full-speed while I stood in Right Field. Seems against the rules, but, what do I know... 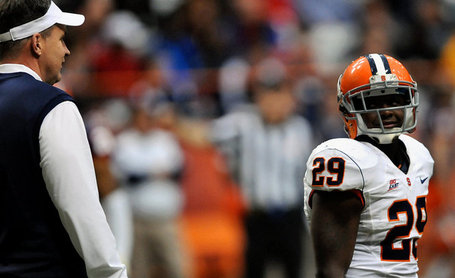 While Ryan Nassib didn't have the kind of day that made you book your trip to the Orange Bowl, he did confirm something that needed very little confirmation. This is his team and that's a good thing.

The junior shook off a pick-six interception he threw on his first attempt to complete 15 of 24 passes for 227 yards. He tossed perfect deep sideline passes to Jeremiah Kobena (53 yards) and Alec Lemon (39), and he ran the offense seamlessly.

"I feel I’m a totally different player than I was a year ago," Nassib said. "I’m just more confident."

And how bout that Dan Vaughn? You'll have to excuse me but when I think of Vaughn, I immediately think of Gary Reasons. As a Giants fan, I have fond memories of the late 90's Linebacking corp that included LT, Pepper Johnson, Carl Banks and Gary Reasons. Reasons was always just kinda there while the other three dominated at different times, but he was still a decent player by any stretch.

I just assumed that Vaughn fit that mold, as a stopgap while younger LBs mature for next year. Turns out, I might be very wrong about that.

Junior Dan Vaughan doesn’t look like a guy who’s just holding a place for the next strongside linebacker. He was the defensive MVP on Saturday, with four solo tackles, two tackles for a loss, one quarterback sack, and two pass breakups. One of those pass breakups was on a fourth-down pass from Loeb to Sales in the White Team’s red zone that sealed the victory.

Special teams had a rough outing. Marrone isn't too concerned however. One day doesn't not an entire Spring Practice make...

"I think I look at the rest of the spring," Marrone said of the special teams. "And how much we've done and how consistent we've been."

Scott Shafer is already in mid-season form when it comes to "convoluted ways of saying something very simple."

"I think we’re in a position where the kids believe we can be better than people on the outside think we can be."

Add that to the list of reasons he'll make a great head coach someday (but hopefully not too soon).

Bud Poliquin deemed the Spring Game a huge success. Why? Cause no one got injured.

"Here’s the truth," Marrone, the Orange head coach, had said before the kickoff. "When I get to the spring game I start thinking, ‘Well, we’ve made it here healthy. I would hate to lose someone in this thing to an injury.’

Congrats to the White Team, who earned their steak dinners.  You better believe Antwon Bailey enjoyed his:

Condolences to any vegetarian members of Team White.