SU 'Hoops: The Immediate Take Away From Waitersgate Part Two

Share All sharing options for: SU 'Hoops: The Immediate Take Away From Waitersgate Part Two 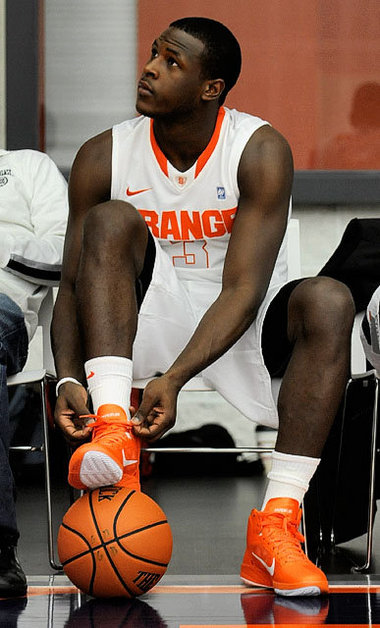 At the end of January, Dion Waiters reportedly told Jim Boeheim to "f*** off."  You don't do that and expect to stick around his basketball team. If Waiters left the team, no one would be surprised.

With that said, the idea of losing Dion still sucks. The guy never had a problem coming off the bench, and he thrived. For a freshman, and at times, he provided an offensive spark to a team that sorely needed it. The 18 points he netted in the Marquette loss, for instance. Every team needs an effort guy--a guy coming cold off the bench that means something--and now, ours is probably leaving.

Like he did last time, Boeheim will try to put out the fire surrounding Dion. It's painfully obvious he doesn't have a very high opinion of him, but he won't give any definite answers. Like this gem he served up in Manhattan, courtesy of CBSSports.com: "Sometimes change is good for everyone."

Then there's Jim's man-crush on incoming freshman Michael Carter-Williams. He raved about the kid at the same clinic he revealed Waiters is on the outs. Coincidence? I think not.

"He's a 6-5 point guard that does a little bit of everything," Boeheim said of Carter-Williams. "He's really, really good."

So, with that in mind, here's what to expect out of this situation:

1) Dion Waiters leaves the program, leaving Scoop Jardine and Rakeem Chirstmas as the only players from Philadelphia. But you'll only hear that a thousand more times.

2) Michael Carter-Williams takes over the Dion role for 2011: a rook who can score off the bench. The coaches groom him for Scoop's job in 2012.

3) Boeheim continues to not take s**t from players/anyone.