Share All sharing options for: Charles Chulada Could Kick Your Grandpa's Butt

Charles Chulada played football and wrestled for Syracuse University between 1969 and 1973. So you can imagine, it's been a while for the 59-year-old.

Of course, we grow'm rather stout up in the Cuse. We breed durable stock. So it should be no surprise that the 59-year-old showed up, like Jake Taylor in Major League, at open tryouts for the Saskatchewan Roughriders on Sunday at Municipal Stadium with every intention of making the team.

"I knew I could do it," Chulada said after running a couple of 40-yard dashes. "I want to put on a helmet and run through a brick wall to show them I can do it."

The self-described brick mason and poet rode his bike -- and we're not talking a Harley here -- from his home in Ormond-by-the-Sea to Municipal Stadium to participate in the free one-day camp conducted by the Canadian Football League team.

Unfortunately, the Roughriders cut Chulada midway through the practice. Unfazed, Chulada said "I didn't make it here, but I'll look for a semipro team or another (pro team) that's having an open tryout." There's always the Scranton Eagles to go back to.

Oh, did I forget to mention he did the tryout in jeans? 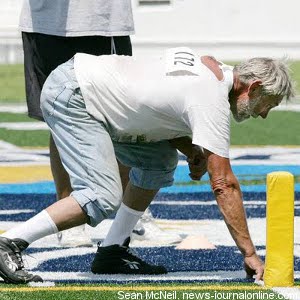