Syracuse Spring Football: Is Marrone Gonna Have To Choke An Orange?

Share All sharing options for: Syracuse Spring Football: Is Marrone Gonna Have To Choke An Orange?

Following up on Dan's report from this morning, here's some more news and notes on spring practice.

Well, to be fair, WE like Doug Marrone when he's angry because it means he's working a death stare that would make Sauron blink: 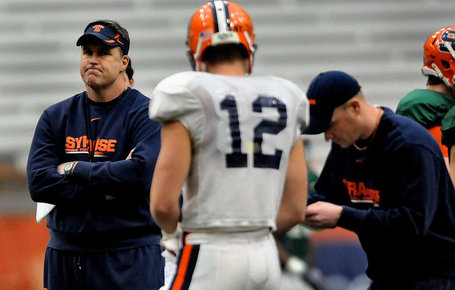 Seven people are dead and nine more were reported missing immediately following the taking of that photograph.

Marrone's beef bologna? He's sick and tired of his players making the same old mistakes over and over.

"I’m starting to hear the coaches become repetitive in their corrections, and that’s not good," Marrone said after Tuesday’s practice inside the Carrier Dome. "If you’re a player and the coach is saying the same thing to you, you’ve got to start changing."

Marrone gathered the entire team at midfield after practice and quietly spoke to the players on that topic for several minutes.

Twelve more bodies were removed from the field following that meeting.

Dan mentioned that freshman Dyshawn Davis is looking more and more like a starter at linebacker. He's doing his best to learn from the experienced few around him:

"I am getting a lot of help from Marquis (Spruill) and Danny (Vaughan) – the two starting linebackers," Davis said. "Before every play, they are checking on me, making sure I know the right keys, making sure I know the right assignment. We are connecting pretty well at this position. Marquis was in the same position last year with Derrell (Smith) and Doug (Hogue). They helped him out. Marquis is a young guy like me, but he is more experienced. He wants me to catch up and make plays."