Share All sharing options for: 'Cuse Hoops: What's Our Motto Next Season?

As soon as Marquette bounced S.U. out of the tournament, you knew you were going to hear all about how the team couldn't finish "Unfinished Business." But let's be real: this squad was going to have a rough time doing what Wes, Rautins, and A.O. (until March) couldn’t do. Let 2009 go. Butler was a better team and six-inches away from a Championship-winning buzzer beater against Duke a few rounds later. 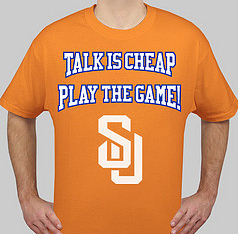 Let’s get this one out of the way. I understand it’s 2011. Athletes on all levels are followed on Facebook, Twitter, and anything else you can think of. But that doesn’t mean they have to continuously talk, tweet, or text—especially in the midst of point shaving-gate or a mid-season slide. Focus on the game, not the "haters" or the "true fans." 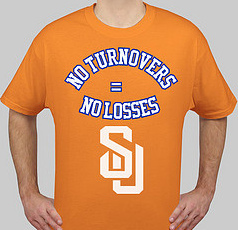 Between Scoop Jardine and Brandon Triche, the Orange backcourt combined for 172 turnovers. That’s plain carelessness, and it keeps inferior teams (see: S.U. vs Rutgers, S.U. vs Seton Hall) in games. Cut those out and you have the team we saw earlier this season—they averaged less than 12 turnovers a game over their first 9 games—and during that win streak late this season—12.4 turnovers per game over a 5 game stretch. 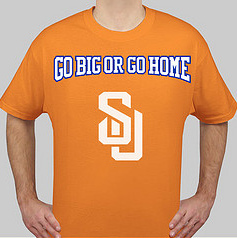 There’s going to be some serious size and potential on the back end of the 2-3 zone next season, and Jimmy B should actually use it. Fab Melo showed flashes late against DePaul and St. John’s. Plug in a healing (and hopefully, improved) DaShonte Riley (6’11) and prized recruit Rakeem Christmas (6’9) and you have a frontcourt that the Big East can’t drive against. 'Cuse got crazy for shooting 3's, but the offense clicked when Rick Jackson was the focal point. That type of offense finishes business in March.