If The East Bracket Of The Big Dance Was ACTUALLY A Big Dance...

Share All sharing options for: If The East Bracket Of The Big Dance Was ACTUALLY A Big Dance... 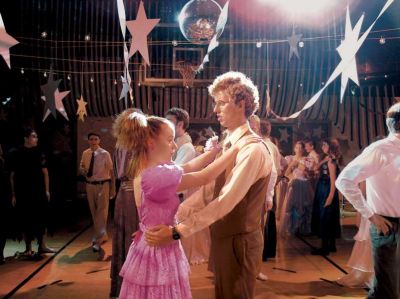 Welcome to the East Bracket dance, Texas at San Antonio. You bested Alabama State last night for a chance at the prom queen, Ohio State (she's looking good tonight). Long Island and Princeton-- your geek friends--told you over a game of Dungeons and Dragons that a lowly 16-seed like you can NEVER conquer the castle of a 1-seed like her. They're only 100% right...

Without further ado, if the Eastern Bracket was the awkward, angst-ridden high school shindig we all remember, here's who the top teams would be:

#1 Seed Ohio State (aka the Prom Queen): Ohio State is popular. Everyone voted for her. And, rumor has it, she has a reputation for "spreading it around" (four players, including freshman Jared Sullinger, average double figures in scoring). She'll totally win.

#6 Seed Xavier (aka the Prom Queen's Best Friend Forever!): OMG! Could you, like, imagine if Xavier knocked off Syracuse or North Carolina? They have a star guard (Tu Holloway) and they hit their free throws (78.4 from the charity stripe), so it could totally happen, and that'd totally help Ohio State out. What? Ohio State is going to be the prom queen? But..but...Xavier is, like, always in the tournament. No one ever picks her!

#2 Seed North Carolina (aka the Dumb Jock):  Like the former star football/basketball/baseball player at your high school who read at a 3rd grade level, they pass by name recognition. Where will they be a year from now, when stud Harrison Barnes brings his 14.1 points per game to the Cleveland Cavs (remember, you lost 17 games in 2009-2010)? Have fun looking like the BMOC when you're picking on Long Island, but we all know you'll be pumping gas sooner rather than later.

#9 Seed Villanova (aka the Kid With "Senioritis"): At some point during senior year, Villanova stopped caring about class work. The result? A 5-15 run to end the year, with a one-point loss to powerhouse South Florida in the opening round of the Big East Tourney. They might not even get past the first round. Slackers.

#5 Seed West Virginia (aka the Pregnant Girl):  Hey, just because she's pregnant doesn't mean she should skip the dance this year, right? She was one of the stars of last year's dance (with Da'Sean Butler and Devin Ebanks leading a Final Four run). It'll take a year to relieve that glory.

#7 Seed Washington (aka the Kid Who Can't Get Laid): The Pac-10 champs have some great game. Junior Isaiah Thomas (no relation) averages a smooth 16.5 a game. But under coach Lorenzo Romar, the six times the Huskies have made it to the dance, they haven't sealed the deal. They've gone beyond the Sweet 16 zero times. Talk about blue balls.

#4 Seed Kentucky (aka the Jealous ex-boyfriend): Look at Ohio State. She's been slutting it up with Duke and Kansas all year. Could've been Kentucky before he lost it all (John Wall, DeMarcus Cousins, and the rest of the Kentucky starting five from last season). But he's back, a little tipsy, and ready to raise hell. Ohio State better not slow dance with anyone else before he gets a shot.

#3 Seed Syracuse (aka the Kid Who Planned The Senior Prank): The kid who planned the senior prank is remembered one of two ways. He might've been immortalized after carving a penis on the football field with a ride-on lawnmower. But chances are, he was all talk. They've started tweet wars all season and tackled a point-shaving rumor. All season has been preparation for "Unfinished Business." It's time to carve that penis or go home, boys.