Editor's Note: SU student Nick Toney was on hand to cover Spring Practice on Thursday. It's his first of many posts to come for TNIAAM. Welcome him with open arms. 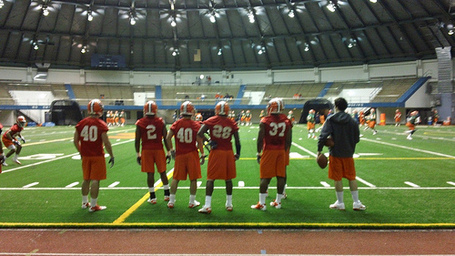 There were two fights, Ryan Nassib caught fire, and I didn’t get a faceful of Marrone for sneaking a few drills on video. All in all, great stuff from the new-look (and less snowed-in) Manley Fieldhouse. Here were the highlights:

4:40 PM: Junior wideout Alec Lemon looks like he needs to down a hamburger—or six—but the guy has soft hands. He catches a couple floaters from Nassib and QB John Kinder.

4:49 PM: Missing Ryan Bartholomew? In the early goings, the Center-QB exchanges look sloppy. Three snaps hit the floor: one from Nassib, one from John Kinder, and one from Jonny Miller. Center Macky MacPherson won't be returning anytime soon if he keeps this up.

4:57 PM: New starters Dan Vaughan and Mario Tull (until Brice Hawkes gets better) show a lot of blitz (see below) looks from outside linebacker. Pressure on the passer is awesome, but later, running back Prince-Tyson Gulley gashes the D on two draw plays when the ‘backers overcommit.

5:07 PM: Weird, but cool way to teach D-lineman to stay low. "The Chute" is supposed to keep form intact.

5:19 PM: Nassib’s throwing darts in the skeleton drill. He’s looking for his tight ends A LOT. Senior Nick Provo catches a deep crossing route, then a swing pass in consecutive snaps. No love for the wideouts…

5:26 PM: …until Pinstripe Bowl wizard Marcus Sales nabs a bomb off play-action. 5:40 PM: The renovations in Manley are nice, but they’re cramped. Kicker Ryan Lichtenstein’s booting a few balls into a practice net less than 5 yards away from O-line drills. He doesn’t look pleased. 5:51 PM: Everyone looks good without pads, but Sales (below) looks great. He goes the distance on another play-action go route. Nassib follows that up with a difficult weak-side bootleg throw to Prince-Tyson Gulley. He goes 40 yards untouched.

5:52 PM: Speaking of Gulley, HCDM doesn’t mind throwing a few screens his way. He throws a nasty juke at linebacker Dyshawn Davis. Nice to know the little guy can move.

5:59 PM: Not to be outdone, starting running back Antwon Bailey gives a hesitation move, then turns on the afterburners down the sidelines. The ball carriers look great. The team gets a kick out of watching fullback Adam Harris tote the rock, though. 6:00 PM: Alec Lemon torches cornerback Ri’Shard Anderson for six. The secondary hasn’t been too hot today.

6:04 PM: Good lookin’ Charley Loeb misses high on a swing pass and possible lateral. Gotta love DC Scott Schaefer. There’s not a defensive player who didn’t help set up a caravan going the other way, just in case. He’s smiling and screaming when they get back to the huddle: "What’re you getting greedy for?"

6:12 PM: Lemon torches the secondary again, but this time he’s got stone hands. Nassib’s got a short memory, though, and threats the needle between two linebackers for Wales. You can hear QB coach Nate Hackett cheer from the stands. 6:15 PM: Nick Provo’s not hurt, but he’s jogging with a trainer…over from receiver drills to O-line drills. He de-cleats defensive end Chandler Jones on his first rep. 6:17 PM: FIGHT ALERT: D-tackle Deon Goggins and starting guard Zach Chibane throw a couple haymakers ‘till D-tackles coach Jimmy Brumbaugh breaks it up. Wouldn’t want to mess with him when he says, "You stop on the God damn whistle." 6:24 PM: Final scrimmage, and the Sales clinic doesn’t close. Nice tightrope catch on the sideline with cornerback Kevyn Scott on his tail. 6:40 PM: Wideout Dorian Graham gets his number called for a reverse and smokes a linebacker. He might be the fastest guy on the team, and it might not be close. 6:42 PM: FIGHT ALERT: Prince-Tyson Gulley is talking like he started it. About 7 S.U. defenders finished it. 6:45 PM: HCDM says "stretch ‘em." He doesn’t look too thrilled about the brawls at the end of practice. Time to dust off the old S.U. helmet and teach these kids a lesson, Doug.