Every single Big East basketball team needs to get together and buy every player on the Rutgers team a fake fur coat. Rutgers sacrificed themselves at the mercy of the Basketball Gods yesterday, but in doing so they did every other Big East team the favor of a lifetime.

They made it impossible for anyone in the conference or around the nation to ignore the fact that Tim Higgins and Jim Burr are terrible, terrible, terrible referees. And not in that way that we think all referees are bad. Most of them aren't. But these guys are. Have been for as long as any of us have been watching Big East basketball. We have so many stories about them specifically it's become cliche to tell them.

But finally, FINALLY, we might be on the road to getting rid of them. 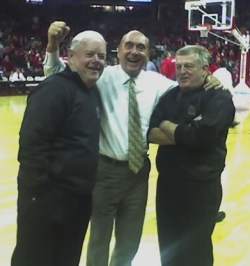 Step one, they're out for the rest of the Big East Tournament. Voluntarily, of course.

Big East commissioner John Marinatto announced the referees' decision to remove themselves from the last three days of the tournament in a statement on Thursday morning.

"The officials who were assigned to the St. John's-Rutgers game Wednesday have voluntarily withdrawn for the remainder of the 2011 Big East championship,'' Marinatto said in Thursday's statement. "With three days of competition remaining, it is our hope that everyone will now focus on our outstanding teams and the exciting games ahead.''

Step two, push forward a manifest to encourage younger referees across the board.

[NCAA’s supervisor of officials John] Adams, who was upset with the end-of-game officiating in Wednesday’s St. John’s victory, told FOXSports.com that he will have no shortage of first-year referees working this year’s NCAA tournament.

"The trend will continue in introducing quality, young referees to the NCAA tournament," said Adams, who is in charge of selecting the 98 officials for next week’s NCAA tournament.

Now we wait for step three. "Voluntary" retirement. It's coming. It's as if you can see if coming...and unlike Higgins and Burr, we won't just walk away when it happens.