The Chiptole Curse Is A Fickle, Fickle Burrito

Share All sharing options for: The Chiptole Curse Is A Fickle, Fickle Burrito 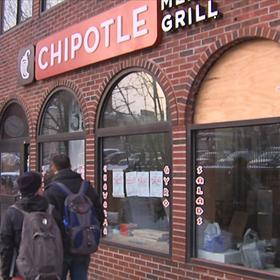 These are tough times for Chipotle.

I don't mean this whole illegal immigrant worker crackdown business. Whatevs on that.

I mean the truth is beginning to seep forth from the steamy foil-wrapped flauta of secrets hidden deep beneath Chipotle HQ. The Chipotle Curse is very real. And it turns out...it's not just a Syracuse thing.

Take UConn, who tried to use Reverse Cursology by eating nothing but Chipotle last week before the Syracuse-UConn game. Due to their insolence, the Orange won in Connecticut for the first time since 1999.

South Florida tried the same thing. How's that turn out?

In fact, UConn's loss led to a startling revelation and a key insight into where the Chipotle Curse truly started.

You see, I have a deep, dark and horrible secret: I've eaten Chipotle before a UConn game before.

It took place in Washington, D.C.

The opponent was George Mason.

My God, UConn was Patient Zero.

This all brings us to tonight's Georgetown game. While the Hoyas have been smart enough to avoid wantonly egging on the Curse, they do willfully hand out Chipotle food at their home games. Great news for us when we head there, unless Scoop finds his way in front of a Burrito Cannon (I assume these exist).

As for tonight, however, there's still the simple truth that since Chipotle made the official announcement that their Marshall Street restaurant is opening and erected their monolithic, corporate logo, the Orange have not won a home game. Bodes well, this does not.

What can we do other than continue to fight barbacoa with barbacoa.

Our barbarcoa is a metaphorical kind. It's grit, determination and an unwavering commitment to zone defense.The patented 2-3 Barbacoa of Victory.

Their barbacoa is literally barbacoa. It's stringy beef.

Who's barbacoa is the better barbacoa? We'll know soon enough. God speed, Syracuse fans. And just try to stop saying the word barbacoa over and over in your head now. You can't.

(By the way, hope you took the OVER on my odds here)