Share All sharing options for: The Syracuse City-State: World-Domination Tour 2011

After Saturday's 72-49 victory over South Florida, there was no doubt that Syracuse was not only back on track as a basketball program, but also as a city-state.

The City-State of Syracuse needed a southern output through which we could coordinate all of our spice trading with the Far East. And so, let's officially welcome Tampa to the Empire: 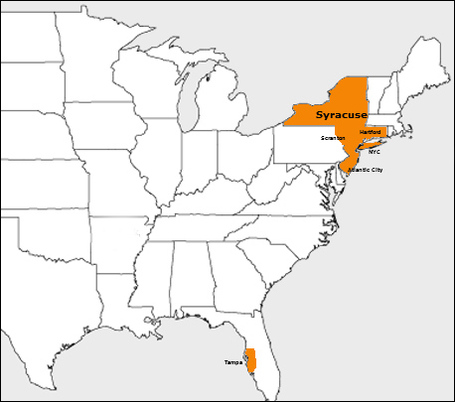 Yes, the Orange in the crowd Saturday practically made it a home game. And yes, ESPN and some other folks noticed and made mention, because God knows they have to. Our greatest crime as a City-State? Traveling well. Seems we'd be better off if none of you cared.

Whatever, blame USF for not having enough fans that care. Not our fault. Georgetown's decision to block us out looks smarter and smarter on their end cause I assure we'd have owned their building otherwise.

By the way, 20 wins, you guys. That's 33 seasons overall and 14-straight for Jim Boeheim. And just in case someone wants to pull the "Well, they play mostly cupcakes in November and December" card, OrangeHoops has you covered:

Syracuse has played 46 top 25 non-conference regular season games over the past 32 years (I’m not counting Boeheim’s first three seasons when there was no Big East conference and thus no non-conference games). Syracuse is 29-17 in those games, winning 63% of those games. He obviously does better against the non-top 25 teams, but to suggest he wins beats only the unranked teams is a fallacy.

If we take his 63% winning percentage against non-conference Top 25 teams, and multiplied that by 35, the average number of non NCAA tournament games a year, he would still win an average of 22 games a year. That’s assuming that he played only top 25 games for every game of the season, which would be absurd.

So there you go.

Syracuse Basketball vs South Florida This, That, and the Other Thing...Brent Axe

SU players revel in the quick warmth of Florida; plus other notes...Donna Ditota

Taking it for granted...Cuse Country