Share All sharing options for: Syracuse Basketball As Compared To Charlie Sheen Quotes 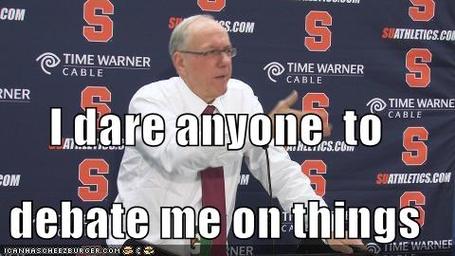 I think we can all agree that everything Charlie Sheen has said over the course of the last week can be directly tied in to the current state of Syracuse Basketball. Allow me to demonstrate:

"The only thing I’m addicted to right now is winning."

For Syracuse fans, completely strung out on wins right now. You don't want to know what we'll do for a few more. Or maybe you do...

For Jim Boeheim. I'm 99% sure this is the exact sentence that runs through Jim's head every second of every day.

"Look what I’m dealing with, man, I’m dealing with fools and trolls. It’s just strafing runs in my underwear before my first cup of coffee, because I don’t have time for these clowns."

For Scoop Jardine, who had to deal with all those nasty rumors started by Internet fools and trolls. In Scoop's case, it should read "before my first double burrito..."

Brandon Triche. If B-Triche naps as well as he handles the rock, I have no doubt about his F-18-ed-ness.

"They lay down with their ugly wives and their ugly children and just look at their loser lives and then they look at me and say "I CAN’T PROCESS IT," well, no, you never will, just stop trying. Sit back and enjoy the show."

For Syracuse basketball as a whole. It was just mere weeks ago Syracuse was living in the middle, getting slaughtered and embarrassed by prom queens. Not anymore. Now we're the prom queen. TIARA US, BITCHES!

"People say 'You have to work through your resentments.' Yeah, no, I'm gonna hang on to them and they're gonna fuel my attack."

For Seton Hall. Trust me, Pirates, we're hoping to see you in the Big East Tournament. We've got F-18s to unleash.

"I have a disease? Bullshit, I cured it with my brain."

Rick Jackson, who was a little soft and unheralded heading into his senior season. The solution, solving the problem brain-style. He's chiseled, in great shape and up for NBA Draft discussion.

"If you’re a part of my family, I will love you violently."

Baye Moussa Keita for some of the best bench-side hugs and high-fives in the business.

For Fab Melo, who's developing some very thick skin this season. Next step, proving the judgers wrong.

"There are parts of me that are Dennis Hopper."

Dion Waiters. I don't know why. I just see a little Dennis Hopper in that guy.

"I am battle-tested bayonets, bro."

C.J. Fair, who's bayonets are getting more and more  battle tested each week. Bro.

"I’m not Thomas Jefferson. He was a pussy." 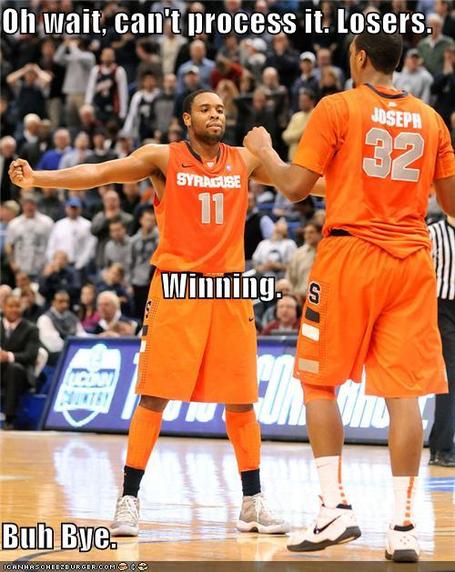