Share All sharing options for: Syracuse 69 - Villanova 64: A Tale Of Two Scoops

Before we get into the specifics, can we talk about the fact that Syracuse just won a Big East road game against a quality opponent? For all the complaining some folks have done about our inability to blow out Rutgers and other non-quality teams, let Monday's 69-64 victory over Villanova in Philadelphia be a reminder that this team, for all its troubles and issues, has the talent to hang with just about anyone out there when it wants to.

And yes, this game was all about Philadelphia and it's sons. Scoop Jardine and Rick Jackson all returned to their hometown with a desire to put on a show. In Rick's final game in Philly, he and Scoop showed us why the Orange might have wanted to play a few more games in the Greater Philadelphia Market.

Scoop Jardine and Rick Jackson returned to their stomping grounds and combined for 38 points to carry No. 17 Syracuse past 15th-ranked Villanova, 69-64, in another close Big East battle.

Jardine notched 20 points and six assists and Jackson had 18 points, including the clinching free throws in the closing seconds for the Orange (23-6, 10-6 Big East), winners of three straight following a 2-6 stretch.

Of course that doesn't mean it was all rose petals and dandelions for Scoop. It was "classic" Scoop is Scoop out there. Every great play seemed to be offset by a patented bone-headed mistake. It was almost shocking to realize Scoop had 20 points late in the game, considering the issues he had at times.

This time, at least, Scoop was clutch when we needed him most. He made some clutch shots late. He had some great passes that led to points and opportunities. Every game with him is a balance of good and bad and the good eventually outweighed the bad with him. It doesn't make Syracuse fans feel terribly safe moving forward, especially with no more motivating games in the Philly area, but at least we got a chance to remember why Scoop is still out there.

That said, let's not get crazy, Scoop:

"Sometimes I can do stuff on the court that gets me a little anxious," he said. "I try to pass it to a person that nobody would have tried to get it to because I make home run passes. But today was just a relaxed game."

I'm glad Scoop had a relaxed game but I know he made most Syracuse fans downright frantic all night.

As for Rick, the big man put on a show out there. I lost count of all the dunks and blocked shots (five dunks, four blocks). Not to mention the fact that Rick Jackson (RICK JACKSON!) hits two clutch free throws to ice the win. Jackson took eleven shots on the night. He missed one.

As much as Scoop got it done eventually, Brandon Triche was the one who "seemed" like the floor leader once again. It wasn't pretty but it was what we've come to expect from Brandon:

This was the second straight game where Brandon Triche didn't shoot well (4-14) but you would be wrong to say he had a bad game.

Triche scrapped for 11 points, 7 rebounds, and 3 steals and made some big plays of his own down the stretch.

Dion Waiters officially came "out of the witness protection program" according to Sean McDonough with his seven-point performance. Dion made some clutch plays down the stretch and bounced back from that egregious foul late to hit some free throws and help the Orange hold on. He's still Dion but it's nice to see him contributing again.

There was a moment when we feared the worst. C.J. Fair went down and he went down bad, grabbing for that ankle. I didn't think there was any doubt he was done for the night and possibly longer. Then Fair came back into the game and erased all concerns. He didn't put up huge numbers (4 points, 2 steals) but he did log 30 solid minutes.

"I just tweaked it a little bit," Fair said. "It wasn’t as bad as the first time. I just panicked when it happened."

Seven points for Kris Joseph. Not what we're asking of him in games like this. He did grab eight boards and he had some big moments, including that one move to the basket when he cut through four defenders to lay it in. Why doesn't he do THAT all night?

Baye Moussa Keita did plenty of Baye Moussa Keita things in his ten minutes. Two points and three boards are his stats, not bad considering his hand injury. He made some key rebounds late and helped preserve the win.

I know complaining about the refs is always bad news, but, COME ON...WHAT WAS THAT? That last thirty seconds of the first half was just a clinic in strange referee-ing. Someone still has to explain what the technical foul on Keita was. Seriously, what did he do that Tim Duncan doesn't do on a nightly basis? The entire sequence made Syracuse's big halftime lead disappear and sucked the life out of the Orange (Though I admit the whole thing happened because of Scoop's awful pass that got intercepted just before all of this. It absolutely KILLED out momentum).

And obviously, this wasn't a flagrant foul. Obviously.

To be fair, the official on the play called it a "hard" foul. But of course, the other two overruled him. Obviously.

Boeheim walked away from the contest feeling good about his team and the heart they showed:

"I thought we played hard the whole game,’’ Boeheim said. "We battled them. This year, we’ve had a lot of games where when we’ve stayed in them, we’ve won them. When we’ve been in the game, we’ve made the plays down the stretch. We’ve battled hard.’’

Sat down at the bar here in Seattle, ask the bartender to turn up the sound on the game. He says, "Cuse is playing? How did I not know this!?!" I ask what his affiliation was. He tells me he grew up in Oneida and is a huge fan. Now THAT'S a good sign for the night.

Villanova student section...meh. Huge empty pockets on the sides of it. What games are you guys going to if not this one? Also, I love the idea of a bunch of dudes standing around with a giant V on their chests. 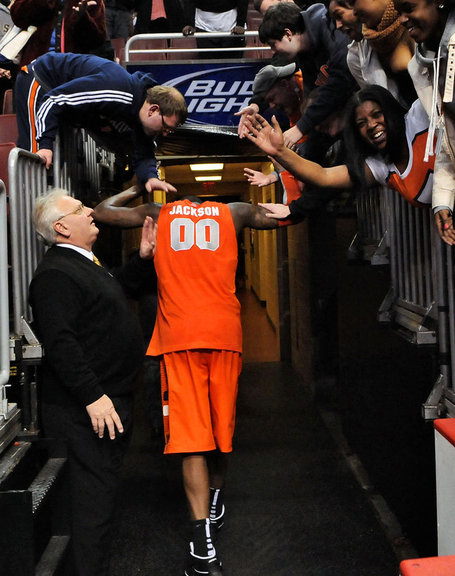