No. 1 Syracuse Defeats NC State: The Photos & Videos To Prove It

Share All sharing options for: No. 1 Syracuse Defeats NC State: The Photos & Videos To Prove It

The No. 1 team in all the land, the Syracuse Orange, defeated the N.C. State Wolfpack on Saturday. Some people took photos and made videos about it. Let's discuss them.

First of all, sad news, you guys. As you can see from the photo to the right, Kris Joseph and Scoop Jardine have been cast in the next Human Centipede film. They will be missed.

True road game? You sure about that?

If you watched closely, you saw the depressed NC State assistant coach who cringed every time Syracuse hit a three-pointer. Sometimes he just closed his eyes and hoped it all went away, other times he buried his face in his hands. Whatever it was, he was sad.

So before we get into the game itself, I want to talk about Scoop Jardine's hair. Specifically, the Friar Scoop look he's apparently decided to go for.

Speaking of hair choices, Fab Melo's entire head will be covered in hair by February. Not pictured is the #MeloMullet forming on the back of his skull. It's intense. Just like Fab himself. 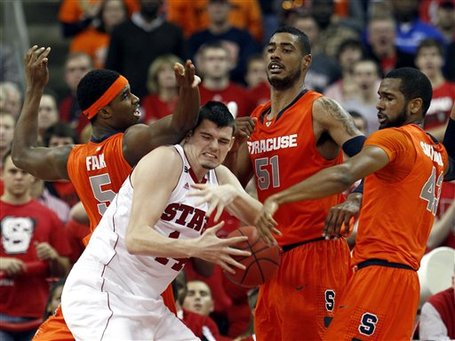 The NC State player in this photo seems terrified of C.J. Fair. As he should be.

I'm reasonably sure that James Southerland's sweat stain is Jesus praying to James.

Perhaps if Brandon Triche had remembered to play with the actual basketball then he would have had a better game.

Mookie Jones didn't play again. It might have had something to do with the joke he told before the game.

Finally, a tip of the cap to My Timeout Guy, who was desperately trying to let Mark Gottfried know he should probably take a timeout during Syracuse's 23-0 run. We salute you, sir. 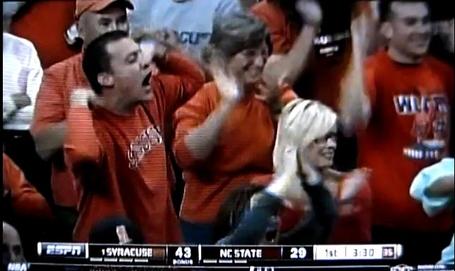 Scoop talks about the game to a group of reporters, including that poor guy in the back just trying to stay awake.

Jimmy B, excited as usual:

Here's some of the best highlights...