It Could Be Worse, Syracuse Could Be Represented By A Terrifying Clown

Share All sharing options for: It Could Be Worse, Syracuse Could Be Represented By A Terrifying Clown

The reputation of Syracuse University is on the rocks after the Bernie Fine allegations and now the Jim Boeheim defamation lawsuit.

However bad you think things are, just imagine how much worse the coverage would be if our mascot was a clown.

While not an official mascot, the clown was one of those random mascots that showed up in the Dark Ages between the Saltine Warrior and Otto The Orange. He's not Egnaro The Troll, to say the least.

I don't know about you, but I've never been so happy to be represented by a gender-neutral, smiling piece of fruit. 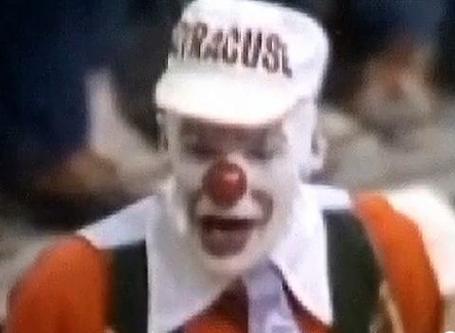