One may assume my recent lack of posts has been due to finals week at Syracuse University. And one would be partially correct, I have been deeply engrossed in scholarly work, but not any that pertains to my current courses.

Over the last two weeks, I have been locked in a lab deep beneath Huntington Beard Crouse Hall with a team of Syracuse's brightest young engineers, sociologists, Board of Trustees members, as well as a few Newhouse people who felt like they needed to be there. After many days of rigorous work, we have finished it- an instrument that will perfect the art of judging the recent play of our favorite Syracuse basketball players. 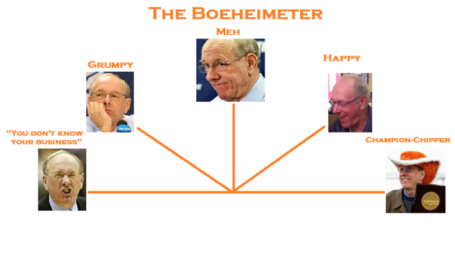 Since we have just put together this incredible feat of technology, the first Boeheimeter of the year will measure player performance of the whole year to date.

Scoop got off to a rough start to the year, but most of us in the Syracuse city-state never got too worried about him. We figured that he would come through in a big spot sooner rather than later, and he proved us right with his big effort against Florida at the Dome. While he isn't putting up huge numbers, they have been on an uptick as of late, and he's been a steady presence on the floor for the Orange. His .450 free throw percentage is really bizarre, and more than a bit disconcerting.

Brandon's been doing some very nice things this year. He's using his physical frame to take smaller guards into the paint, which is something many Orange fans have been hoping for since he was a freshman. He's shooting fairly well, although as one of the team's more relied on shooters, you want his 3-point percentage to be a bit higher than 37%. He's played well on and off the ball. The biggest thing for Triche, as it has been throughout his whole career, is consistent play. Some nights he drops 20, but there are far too many where he is nowhere to be found.

Kris has been playing very well all season. He's scoring from all over the court, rebounding fairly well, and looks to be one of the go-to-guys we all know he can be. He obviously has some things to work on, especially when he gets the ball in half-court situations. When he pounds the ball into the ground and tries to get fancy with his between the legs and behind the back dribbles, he becomes a turnover machine. However, there aren't many other complaints to be had with how Kris has been playing; his numbers are very good, especially considering the fact that he's been playing under 30 minutes per game thus far.

Following last year's Fab Melo debacle, most Orange fans had their expectations for freshman big man Rakeem Christmas appropriately tempered, despite him being named starter out of camp and holding that spot for ten games now. Christmas isn't giving us too much right now, and has only played 13.7 minutes per game thus far, but there have been bright spots. He looks to have a few moves around the basket, he can move the ball from the post well, and he has a knack for blocking shots, although he does pick up fouls quite often when trying to do so. Rak is a really raw player, as everyone said he would be coming out of high school, and won't be a major factor this year, but he is ahead of where Fab was last year, so he has that going for him I guess...

It really is hard to admit that we are watching the same Fab Melo who played for Syracuse last year. The biggest thing for Fab this year is that he can stay on the floor- he's playing over 22 minutes a game and rarely looks like he's struggling to do it, and instead of committing stupid fouls, he's flopping like a Blue Devil. He still struggles to finish around the hoop, and his rebounding definitely leaves something to be desired, but you can't help but smile watching Fab play this year. Also, the dude can flat out block shots.

Talking about sophomores who are having breakout seasons, the argument could be made that Dion Waiters has been our best player. He's scoring at will, often creating the opportunity off of his own steal. He's been pretty smart with the ball, with a better than 2-1 Assist-Turnover ratio. As Boeheim noted in his last presser, his defense has been tremendous in both the zone and the man-to-man. His whole demeanor on the court is just better. The only thing that his game is lacking is a consistent jump-shot, but he seems to make more than he has any right to.

C.J. continues to be among the smartest players on the team; he always seems to be in the right place at the right time. He plays great defense, rebounds really well, and doesn't force the issue on offense. His improved 3-point shot has the potential to be a huge weapon. My biggest concern is that he seems to really struggle against zone defenses, and I can see teams zoning us down the road because we don't have a great, consistent 3-point threat.

Some will question why I'm The Boeheimeter is giving James a higher grade than C.J. Well, The Boeheimeter grades on a scale. Last season, James looked absolutely lost in games where his shot wasn't falling, and even when it was, he wasn't contributing much else. This year, he's been a much better all-around player. His shooting is still feast or famine, but the rest of his game is coming along. He's still not a great rebounder, but he's shown improvement from last year. What has been most impressive is his ability to block shots, and to play the passing lanes.

Keita has been pretty disappointing this year, all things considered. I have to think his hand is still bothering him, because he's really struggling to catch the ball, whether it is on passes to the post, or on rebounds. Last year, he was a rebound machine. He's really struggling this year. It's definitely a concern, because we need both Baye and Fab to play well in the Big East, or teams with legitimate big men will eat us up.

MCW hasn't shot the ball well, but he's really doing everything else quite effectively, and right now scoring is not his role. He might be the best passer on the team already, he rebounds really well for his size and is not afraid to go in the paint, and he plays great defense. I have a feeling that if this was just an assessment on the last week of play, MCW's grade would be higher. I'm very excited to see him develop this year.