We've come a long way from the Homoerotic Adventures of Eric Devendorf, The Scoop Jardine Stripey Shirt Days and the Canvas That Was Andy Rautins' Hair. And yet, I don't think I've seen photos of a Syracuse Orange basketball game that provided as much as the George Washington game.

Obviously, that photo of Baye Moussa Keita is the most amazing photo ever taken and if you aren't photoshopping him into Sparta as we speak then there's no point in you and I having further discussions.

Fab Melo had himself a great photo day. The #Melohawk looked especially fierce. Still, that doesn't mean he and C.J. Fair couldn't have a moment to come together in friendship and hold hands. 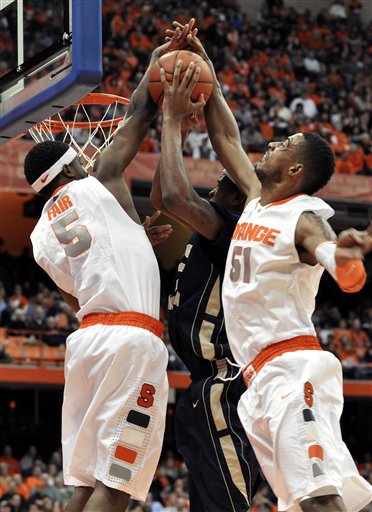 Fab and C.J. weren't the only teammates working in tandem. Brandon Triche and Scoop Jardine showed off some moves from their new two-man show: A Scoop Of Bran.

Going back to Brandon Triche for a second, you can't stare at his face this photo for more than three seconds without giggling. You just can't. I better see a Photoshop that includes both Baye's Spartan yell and this... 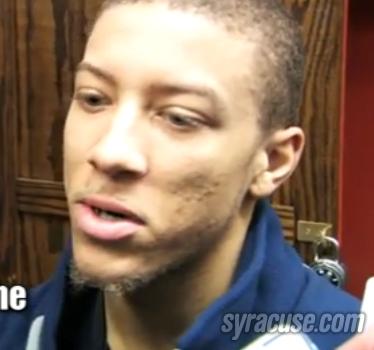 He ain't no James Southerland, I'll tell you that.

Michael Carter-Williams is still working out the freshman kinks. Like, say, treating the basketball like it's not covered in spray-on butter.

Jim Boeheim channels Lou Brown with his, "Nice dunk, don't ever f***ing do it again" face.