A few nuggets of whatnot following the Syracuse Orange's victory over the Stanford Cardinal in the NIT Tip-Off Tournament.

A hearty congrats to Brandon Reese. While he did not garner any stats in either game, he did get some nice placement in the trophy photo, as is customary. Congrats, Brandon!

I'm still trying to find video of it but in the meantime, here's some classic Boeheim during the press conference:

Syracuse senior Kris Joseph did almost everything right in the final minutes of the Orange’s win over Stanford.

Only in the post-game press conference did Joseph stumble.

As he got up to leave, Joseph tripped and nearly yanked a microphone off the table.

"Don't get hurt,’’ said SU coach Jim Boeheim, who then quipped, "Another turnover.’’

Here's some more video of Boeheim after the game courtesy of CitrusTV:

After we noted it a few weeks back, it seemed like Dion Waiters got the hint that he didn't need to spend the entire post-game retweeting every person that said he did a nice job. It looks like the salad days are back again. Can you get a retweet? Oh yes, you can get a retweet.

Here's a video of Kris Joseph, Scoop Jardine and C.J. Fair talking about the game. The MVP of the whole video? Those cute hats everyone is wearing at the end. How adorable! 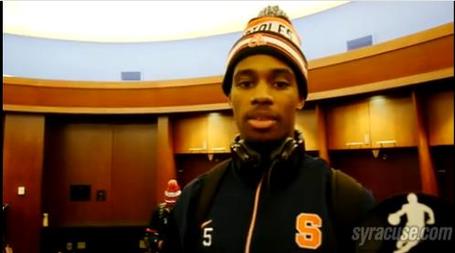 Did you know there was an All-Tournament Team for the Tip-Off? C.J. Fair certainly didn't. But now that he, Dion and Kris are on it, Mama Fair is the big winner:

"I didn’t expect it," Fair said. "I didn’t know they had an All-Tournament team. But it was nice to hear my name called. I’m gonna give mine to my mom."

Finally, I'm not kidding when I say that James Southerland's Twitter images stream is a required bookmark for you. My hope is that James prints out all these photos and makes some kind of coffee table book out of them. In the meantime, we can merely appreciate them as they arrive. Like this one, which feels so wrong and yet feels so perfect at the same time: 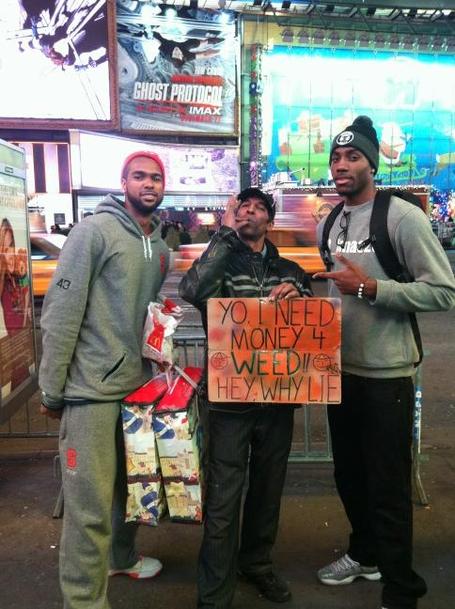