Forget all that nonsense about getting up at 3am so you can hang out in Target and buy Twilight books. You don't need any of that business.

Before we get started, one thing. If you're planning on shopping on Amazon today and you have no vested interest in how you get there, please do me a favor and go there via this Amazon link

. Think of it as passively-supporting TNIAAM. It's the second best kind of support. Thanks!

First and foremost, I think it goes without saying that if you haven't purchased a copy of How To Grow An Orange for every Syracuse fan you know, you're a Scrooge (or Scroogenstein, if you're Jewish).

While the 2011-2012 Syracuse Basketball season is well underway, perhaps you still feel like you need a primer to get caught up. Then perhaps you still need a copy of Orange Tip-Off 2011-2012 Season Preview. Featuring articles from your favorite Syracuse writers, it's everything you need to know about this SU squad.

You can purchase the e-book/Kindle version here, where the price has been dropped from $9.99 to $5.99. 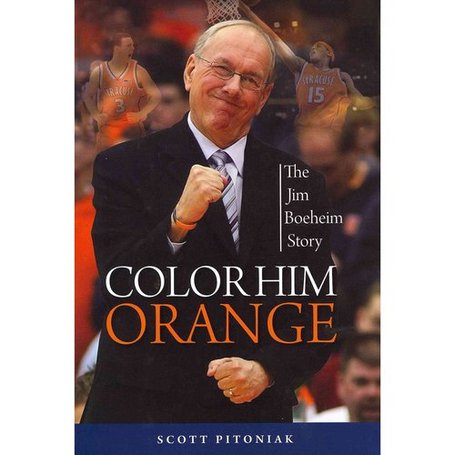 One of the writers of Orange Tip-Off was Scott Pitoniak. Scott did a pretty amazing write-up on Dr. Fred Lewis, the coach-before-the-coach-before Jim Boeheim as well as the man who recruited James Arther to attend SU in the first place. Pitoniak has just released an entire book about Boeheim called Color Him Orange: The Jim Boeheim Story

The book examines the people who shaped Boeheim as a person and a coach, the great players he has coached, and his incredible devotion to raising money in hopes of eradicating cancer—which claimed both of his parents' lives, and has also victimized Boeheim himself.

Another author in Orange Tip-Off was Aaron Goldfarb, whom you might remember from the The Big East Tournament Is Decadent And Depraved series on TNIAAM last season. He's also the author of How to Fail: The Self-Hurt Guide

. In "How to Fail," follow the misadventures, misgivings, and massive mistakes of this satiric novel's narrator, Stu Fish, as he tries to find success in 2010 New York. You can purchase the paperback version in that link there or the e-book version here.

For Ernie Davis completests, don't forget about A Halo For A Helmet, about the life of the famed No. 44. It's written by K. Coralee Burch, who attended high school with Davis. She speaks with many of Davis' friends and contemporaries like Jim Brown, John Mackey and John Brown. For the Ernie Davis story that you didn't see in The Express, check out A Halo For A Helmet.

Speaking of The Express, you should probably own that. And everyone else you know should own it. It's available on DVD

and Amazon Instant Video. And of course, there's the book Ernie Davis: The Elmira Express, the Story of a Heisman Trophy Winner

You read Mike Waters' stuff over at Syracuse.com all the time so don't forget about Syracuse Basketball Vault, an ultimate history of Syracuse basketball.

There's obviously a lot more things you could be purchasing for all the Syracuse fans in your life but this will get you started.