How bout a little something to lighten the mood, huh?

So as you might know, there have been complaints and concerns for some time about the state of the Otto costume. The orange is worn down, dirty, faded and a tad oblong. Clearly, it's time for a new and improved sentient orange.

And so, thanks to a generous gift from SU Athletics and supporters, a brand new Otto will debut in the Spring semester.

There is no official photo as the costume is being designed so James McAllister was kind enough to mock Otto up for your viewing pleasure: 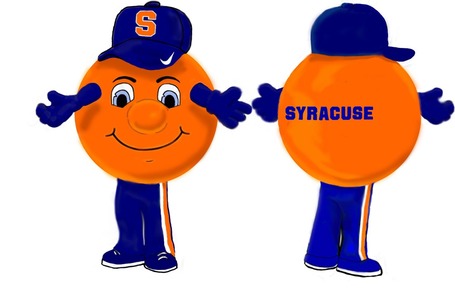 For the first time, Alinco, the world's largest and oldest producer of mascot costumes, is creating Otto.

The new costume cost around $10,000 to create. Based on wear and tear, the costume usually needs to be replaced every 2-3 years and Otto's supporters start from scratch each time, not to mention needing to pay for travel to competitions. As such, anyone who would like to support the Otto/Spirit Program, can send donations to Syracuse University Spirit Program . Send donations to:

Interestingly, we almost ended up with something far different than a simple Otto upgrade. According to one person who works closely with Otto, there have been talks internally to create alternative versions of our beloved walking orange, including an "Angry Otto" like Mike Borkowski's drawings.

There were also discussions of creating a "Rally Otto" akin to how the Atlanta Hawks have Skyhawk for dunks, acrobats and doing much more limber things that Otto just can't do.

There was even discussions of introducing a secondary mascot altogether, Otto's little sister Clementine, who would work children's events.

However at the time being, all of those discussions are on hold.