You're probably watching schools like Duke, Tennessee, Memphis and Michigan in the Maui Invitational on TV right now. Well, not RIGHT NOW but in the present timeframe.

Next year Two years from now, you'll get to watch your Syracuse Orange in Maui, likely without any ball boys. We won't know exactly who they'll play for some time but the list of participating schools is available for us to peruse: 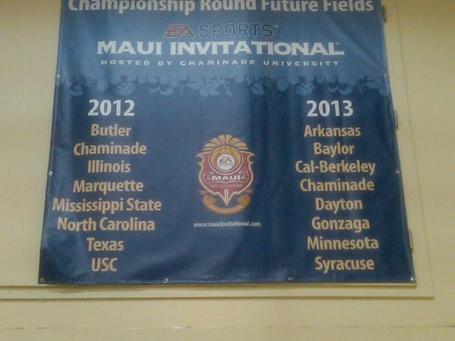 Some interesting names on that list from SU's recent past.

Gonzaga is likely looking for a little payback after we beat them in the 2nd round of the NCAA Tournament two years ago. We also defeated Cal in 2009 at part of the 2K Sports Classic at MSG.

Meanwhile, Baylor is currently No. 9 in the AP Poll and Arkansas will have Marshawn Powell back next year,causing havoc.

For those a little underwhelmed with Syracuse's 2011 early season tournament slate, this should appease you moving forward.

Of course, someone at ESPN will stay say that Syracuse "hasn't traveled outside the continental United States all season."