I have posted this twice since I wrote it up yesterday, I thought it might make for an interesting read on its own so I am going to post it here for comment.  I think its tough to see the forest for the trees with Ryan.  He is not the most impressive or commanding QB to watch during gameplay, but his statistics are creeping up to some pretty impressive levels.  Here is the straight dope on Nassib, and a comparison to the three quarterbacks ahead of him on the Greatest Hits chart for Syracuse Football. 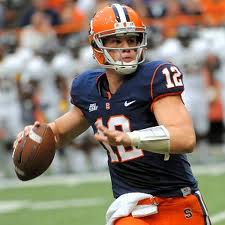 Before anyone criticizes Ryan Nassib, two things need to be made clear:

1.) He is the best QB Syracuse has had since McNabb - easily surpassing RJ Anderson, Paulus, Robinson, Dantley, Patterson, and Nunes.

2.) In the next 1.5 seasons, he may be second only to McNabb in terms of performance during his career, based on the last 40 years of Syracuse QB history. He would surpass Marvin Graves and Don McPherson in total yardage and TD's if he stays on track.

Nassib is still quietly coming up the charts in the SU QB stat sheet. His two first-half touchdown passes at Tulane moved him past Troy Nunes into fourth on the SU career list. He now has 33 touchdowns."

All in all, Id say he has an excellent chance at passing McPherson, and probably catching up to Graves, but I certainly dont think he could get to Donovan’s superstar level – 77 touchdowns? Thats insane now that I look at that stat. So, behind McNabb, Nassib could more than likely end up the contender for our second best QB of the last 40 years.

Nassib would have to throw 2.5 touchdowns per game in every game for the rest of his career to even match McNabb, and I don’t think that’s happening. However, even if he doesn’t quite match the yardage, he could easily beat Graves and McPherson for passing TD’s, and I think its reasonable to think he could hit 7500-8000 passing yards in his career if he starts in every game until the end of next season.  Its sick to think that those guys were ALL Heisman contenders and an NFL starter, so he would be in some pretty elite company.  If you want to argue rushing touchdowns, and use that as a benchmark of a complete modern QB - I cant argue with you on that point. He's only got two, compared to 18-19 for McNabb, Graves and McPherson.

I guess in the end the more important stat is TDs than passing yards.  Cause isn’t that the point of passing yards? So either way, Id say the kid has got a shot at ending up being something pretty special here at SU, baring meltdown or injury. For being an unheralded 2 star recruit (from rivals and scout) from the Philly suburbs, he is slowly starting to really impress.

Please use all these stats to rebuff all the Nassib haters out there at will.