Behold The Glorious City-State Of Syracuse

Share All sharing options for: Behold The Glorious City-State Of Syracuse

Whatever you learned in high school or college was wrong. Per the teachings of ESPN and its many acolytes, I give you the true map of the United States of America's Northeastern Kingdom. 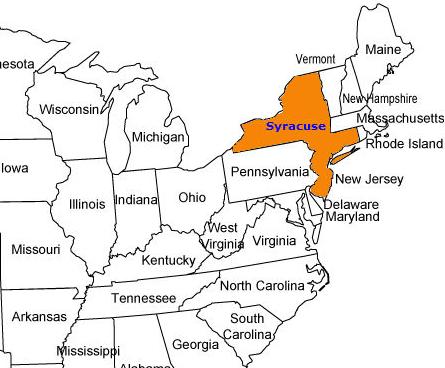 Witness the majesty of the city-state Syracuse! Whether you be in Upstate New York, New York City, Newark or Atlantic City, the sun never sets on the Orange Empire...until around 6:00pm.

Syracuse, or The Otto-Man Empire as it is referred to in some texts, is a prominent city-state in modern-day America, situated on the banks of the River Hudson, stretching from the mighty waters of the Atlantic to the frigid lakes of Great North.

Syracuse emerged as a political entity around the 21 century AD, when the invading Orange tribe from the North sacked the remaining city-states of Upstate New York, New York City, Connecticut and New Jersey. Since 2009, it has become the dominant military land-power in the Northeast.

Given its military pre-eminence, Syracuse has been recognized as the winner of the Cusian-Georgetownian Wars (citation needed). Between 1980 and 2010, Syracuse was the principal enemy of Georgetown. It emerged victorious, though at great cost. Land wars against neighboring Villanovillians and Pittsburghians continue to this day.

Syracuse is unique in modern times for its social system and constitution, which completely focused on excellence and a general sense of "unfinished business." Its inhabitants are classified as Cusians (Syracuse citizens, who enjoy full rights), New Yorkers (non-Syracuse free men raised as Cusians), former St. John's and Seton Hall fans (freedmen) and Rutgers fans (state-owned serfs, enslaved non-Syracuse local population). Cusians undergo the rigorous training and education regimen known as the "Jim Boeheim Feats Of Death," and Syracuse's phalanx zone defenses are widely considered to be among the best in battle.

Syracuse women enjoyed considerably more rights and equality to men than elsewhere in the modern world, especially the SEC.