Doug Marrone held his weekly press conference on Monday.  That means only one thing...Wordle Cloud Time! 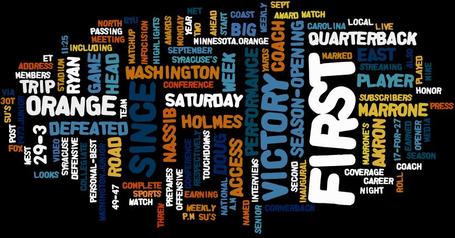 More importantly, the Akron win reminded us about Doug's favorite word of the 2010 so far.  NICE.  And it made a tremendous return this week.

"We’ve worked on it for a very long period of time, meaning starting after the 2009 season, about learning how to win. I thought we did a nice job of that."

"During the course of the game, I thought we did a nice job coming out strong on offense."

"Offensively, (wide receiver) Van Chew did a nice job for us."

"Our coverage teams did a nice job."

"I think it was execution. I think we did a nice job and we left some of them out there."

"When you’re at 80-percent and you’re putting people in those types of situations, you have a chance to be successful. So those guys did a nice job."

From that standpoint, one of our goals of first-down efficiency, our defense was at 80-percent.

This is the second week in a row HCDM's presser was tremendous-less.  Dare I say an era has ended?

I dare not just yet.  But if we go three-straight weeks...well...that's unprecedented territory.