The Growing An Orange Contest - 9/30 Entries

Share All sharing options for: The Growing An Orange Contest - 9/30 Entries

Alright, this is just about it for photo submissions for the Growing An Orange contest. You have until the end of the day to submit entries.

And now on to today's entry 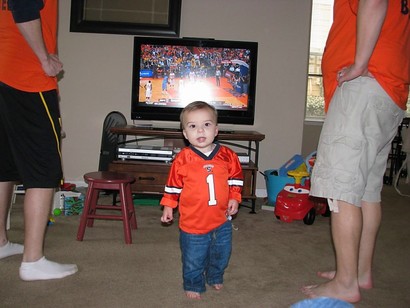 Coop's got on his fancy Syracuse jersey, good for three points.

There are two other SU fans in the shot, that's two points.

What's that on the TV? Why its the Syracuse-Marquette game. Two points.

Three bonus points for the matching Shut It Down shirts, as confirmed in this photo.