The Growing An Orange Contest - 9/29 Entries

Share All sharing options for: The Growing An Orange Contest - 9/29 Entries

Alright, it's getting down to crunch-time for photo submissions for the Growing An Orange contest. You have until tomorrow to submit entries.

And now on to today's entry 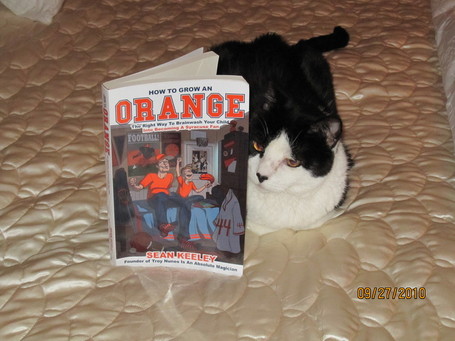 Patch seems to be halfway through HTGAO already and his look of confused boredom is exactly how I imagined it. Ten points.

Bonus ten points because Patch is my former roommate at Syracuse. Well, not technically. You won't find him on any official University lists. I met Patch outside my apartment on South Campus one day. We hung out. He took off. I said that if I ever saw him again I'd take him in. The next day he was back and that was that. Until the day inspectors showed up, demanded to know why the apartment smelled like kitty litter and he was shipped off to live with Mama TNIAAM, where he's been ever since.

Oddly, the apartment continued to smell like kitty litter for years to come.