The Growing An Orange Contest - 9/27 Entries

Share All sharing options for: The Growing An Orange Contest - 9/27 Entries

Alright, it's getting down to crunch-time for photo submissions for the Growing An Orange contest. You have until the 30th to submit entries.

And now on to entries...

Little Oranges: Keegan & Emma (due to contest restriction, only Keegan will earn points) 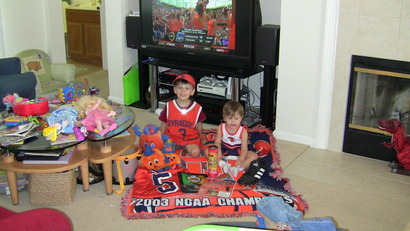 Keegan is wearing a Syracuse jersey, good for three points.

Bonus two points because it's a G-Mac jersey.

Because of the #5 Perry Patterson jersey also in the picture, that's a bonus three points.

He's also wearing an SU hat for one point.

That's a Syracuse game on the TV in the background, that's two points.

Otto is clearly in the photo, so that's three points.

The shoe, helmet and visor are signed by Donovin Darius, good for eight points.

The 2003 NCAA Championship throw is the next-best thing to a newspaper from the day, three points for that.

And a bonus one point for Emma, who will probably be pretty upset if we don't give her any points. 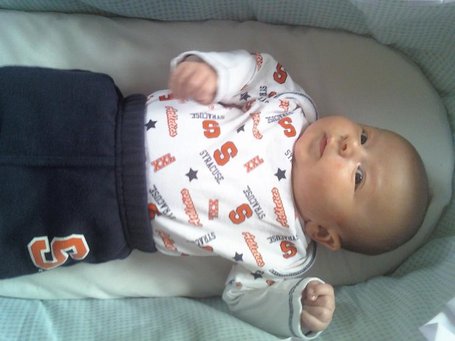 For the SU jumper and shorts combo, two points awarded.

Bonus three points for the cheer Brady is clearly doing for the Orange.