Share All sharing options for: Orange Tip-Off 2010-2011 Is Now Available

There's been many unintended delights that have come from writing this blog. The many appearances on Syracuse radio shows. The book. Meeting all you fine folks (at least in the online sense).

And now...the chance to edit a Syracuse Basketball preview magazine. Maple Street Press reached out to me a couple months back to help put together a collection of the best articles and resources for Syracuse fans heading into the upcoming season. I jumped at it. 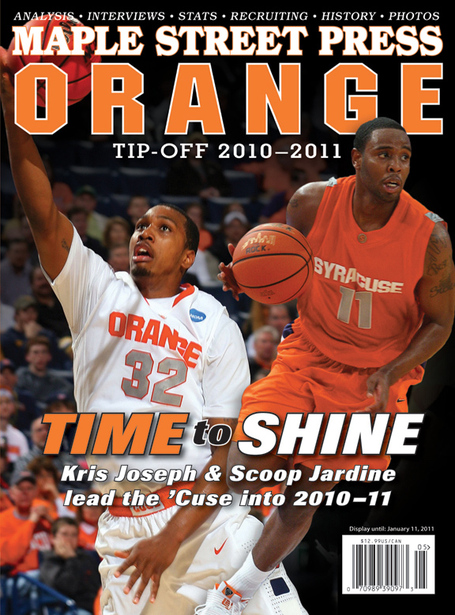 The magazine is available for pre-order now. Or you can wait until it's on newsstands in the Northeast on October 19th. It's 128 pages and there are no advertisements, so it's 100% Cuse content.

The really cool part of the mag? The articles are all written by Cuse bloggers, writers and fans that you know (and possibly love).

Jameson Fleming delves into the good work Otto's Army is doing, talks with Scoop about the 2-3 zone and gets the Class of 2011's thoughts on The Melo Center.

Brian Harrison (Orange44) recaps the top moments of last season and ponders what lies ahead for Mookie Jones.

Brian Goodman (CuseOrange) recaps last season's glorious run and looks at Kris Joseph in his quest to be Syracuse's next star.

I profile Mike Hopkins, our head coach in waiting, and delve into the traditions and history that make SU athletics what it is today.

Plus player and coach profiles from those mentioned above as well as The McSportsFix's Matt McClusky, Dan Lyons, Kevin Kearns and Alex Kirby.

There's also schedule breakdowns, more statistics than you shake a stick at (not that you would) and other random bits of information that will come in handy when you're watching Syracuse-Northern Iowa this November.

I hope you'll check it out, it was a labor of love for all involved (well, at least for me). Please spread the word to other Cuse fans to check it out as well. G'Orange!