The Growing An Orange Contest - 9/21 Entries

Share All sharing options for: The Growing An Orange Contest - 9/21 Entries

The Growing Your Orange contest is underway! We've got time before the September 30th deadline but a couple entries are already in. Now it's my turn to assign some points.

Oh, forgot to mention, there will be a second prize that we'll pick a name out of a hat for. Anyone who enters gets put in the drawing. So even if your photo doesn't stack up points-wise, still submit it for a chance to win the 2nd prize. 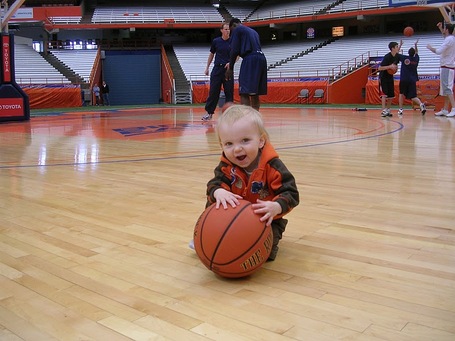 Not sure if its SU-specific but the jacket is orange, so, one point.

Technically there are more than two other people in this photo in Syracuse gear, two points.

We're clearly inside the Carrier Dome, so seven points. 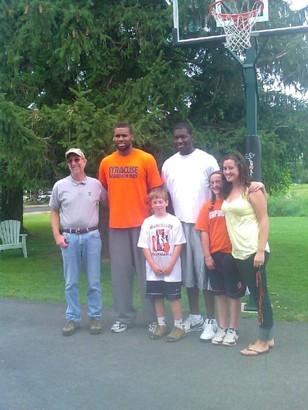 Since I have free reign, I'm going with the young lass in the orange shirt. That's a SU shirt and shorts, so two points there.

This photograph clearly has more than one other person in Cuse gear, so two points.

Technically, Arinze is now a former player, so twenty-five points.

A bonus point is awarded for AO's half-smile. A rare treat. 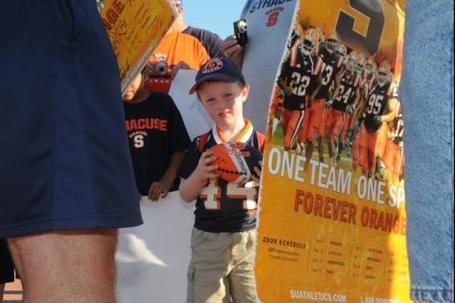 For the Syracuse hat, one point.

The Syracuse football and the poster both count as SU jewelry, in a loose sense, so two points for that.

There are two other Cuse fans in the photo, so two points there.

The SU jersey is good for three points.

That looks like an autographed poster that's being held above his head, so eight points.

That massive hunk of meat on the left belongs to Doug Marrone, so twenty points there.

Bonus five points for the fact its specifically a photo with Doug Marrone's thigh. 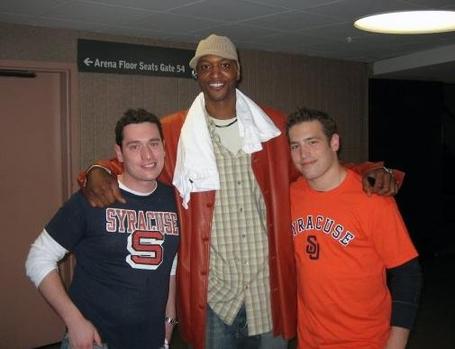 Evan's on the right, so he's got a SU t-shirt for one point.

That's John Wallace towering over them, so twenty-five points.

Bonus five points since this is at the Big East Tournament in MSG.