Share All sharing options for: Wanted: Dorian Graham Enthusiast With Penchant For Burglary

The Auburn police are on the lookout for a man who broke into Auburn Discount Liquor at 4 a.m. Wednesday.

Police said the suspect broke in through a back door of the business at 21 Seminary St., but fled the scene without stealing anything. Police added the suspect may have realized that the business' alarm was triggered, causing the suspect to leave.

Surveillance video showed that the suspect was wearing shorts, a Syracuse University-styled jersey with the number 10, a type of head covering and gloves.

From the camera footage, it looks like he was wearing that jersey over there on the right.  That or his last name is Syracuse.  If that's the case, he shouldn't be too hard to find.

Syracuse WR and #10 Dorian Graham has no comment.  At least I assume so. 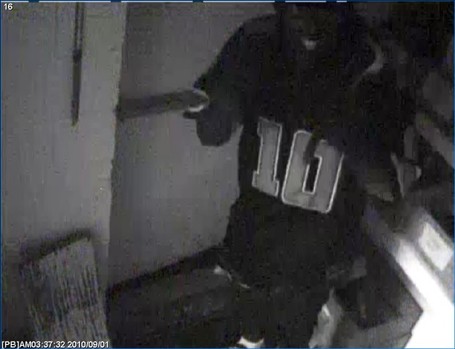