If you play NCAA Football long enough, you get good enough to attempt a dynasty on the Heisman level, the hardest of all of them.  And if you want a real challenge, you start as a truly awful team.  Your first road game will always play out in exactly the same fashion.

1. The computer will give you a brief amount of time to rack up as many points as you can.  Your passes connect. You're able to break off a couple big runs.  You might even run back a kick or get an interception to set up a score.

2. At some point late in the first quarter or early in the 2nd quarter, the game will completely shut this feature off and begin the process of decimating you.  Your passes will all be batted down or, more likely, intercepted. Every run play you call will be stuffed and the odds of your RB fumbling rise 4700%.  You will somehow be sacked nine times in three plays. And you sure as hell won't score any points for the rest of the half.

3. Late in the 4th quarter, the game will ease off the pedal and begin to let you make plays again. It will be slow going and it's probably too late to win the game but you can at least pad your stats to make things look more respectable as you wonder why you didn't just schedule a game against FCS East instead.

Now tell me that doesn't sound exactly like the game on Saturday.  Here's some thoughts on how it went down followed by links and videos discussing the game.

From the moment I got up Saturday to the time I spent walking around the stadium, it was clear Washington fans expected to roll on Cuse. Every radio show was less about whether or not the Orange were a problem and more about whether or not the Huskies would execute well.  Overheard before I walked into the game was "this is going to be a scrimmage."  Sadly, there were times when it felt like that.

Then there's Mitch Levy, a Cuse grad and host of a sports talk show.  I listen to Mitch rail on how horrible Syracuse is for a good ten minutes.  He talked about the team was still terrible, was probably never going to be good again and that the offense was probably the worst offense UW would face all season.  Mitch, I don't care what market you work in...as an alum your sins are unconscionable.  By the power invested in me by Melvin Eggers, I hereby excommunicate you from the Syracuse alumni fanbase and your invitation to the party when we're a winning team again has been officially revoked.

A tip of the cap to Husky fans, who were a class act.  Sure there were a couple instances of surly smacktalk but that's to be expected from any fanbase. For the most part they were welcoming, non-abrasive and a pleasure to be around.  When they did approach SU fans, it was usually to find out where they came in from, how they liked Seattle and insight on the team.

During the game, there were a couple of rowdy SU fans sitting in front of me.  To be honest, they were a little obnoxious at times.  Never did I see a Washington fan turn and get into it with them.  And when the Huskies started taking over the game, none of them turned back at us and started in.  They let us celebrate when it was appropriate and they did their own...much more often.

My two favorite things that UW fans said on the day:

"It must be hard for Syracuse, what, being in New York right in the middle of Times Central."

"Who did you guys play last week, Acorn?"

Considering what Akron did this past weekend, that would indeed be an appropriate name now that I think about it.

NOT SO SPECIAL TEAMS

I don't know if Bob Casullo gets a separate paycheck for his services as the Special Teams coach but if he is, he should return the check.  Along with any other monies he's accrued from the position.  He is quite literally stealing money from this university at this point.  I know this because we lost this game because of special teams.

Now, let's take a step back because I don't mean that the way it sounds.  We lost this game for a lot of reasons beyond them.  But if you want to pinpoint the moment the game turned on us, it's because of poor special teams play.

The game opens and the Orange do exactly what they need to do in order to stay in the hunt.  They score on the opening drive.  They clamp down on the Husky offense.  They kick a field goal to keep the momentum going.  It's 10-0.  SU's momentum bar is at full tilt and Washington's momentum bar is at nil.

From here on out, it's a matter of keeping that momentum difference in roughly the same spot for as long as possible.  We all know Washington had more talent and had Jake Locker.  Like the Louisville upset back in 2007, time was our enemy.  The longer the game went on, the better the chance they would win.  We just needed to rack up points and keeping things going for as long as we could.

The Huskies started chipping away but still the SU defense remained stout.  They bent but didn't break.  IF SU could just put some more points on the board and give the D some time to rest, they could really do this.

Then Prince Tyson-Gulley fumbled on a kick-off, leading to a Husky TD.

Then Ross Krautman missed a field goal to tie the game at the half.

And just like that, the momentum was gone.  The Huskies were winning and they never looked back.  The Orange came out in the second half ABSOLUTELY FLAT.  It was obvious from the upper deck.  The momentum was gone and reality had set in.  Too many mistakes, too soon.

Here's a handy-dandy scientific analysis of Syracuse's offensive efficiency on the day: 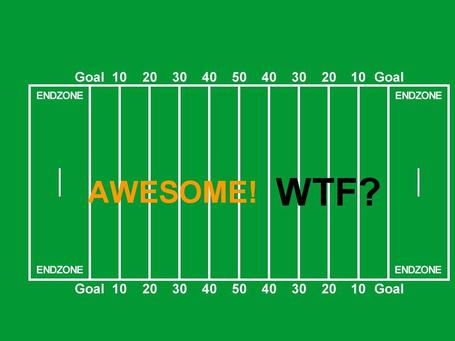 If Syracuse was offense between their own endzone and Washington's 40, they were an unstoppable juggernaut capable of scoring at will.  But once they crossed that Rubicon at the opposing 40, they shut down faster than Lindsey Lohan's liver when she turned 30 (ba-dum-ching!).  It was uncanny to watch.  So much so that you basically gave up hope despite all the success seen beforehand.

And look at where the Orange started their drives from.  To only come away with 20 points (13 if we're not counting the garbage time TD pass) is ridiculous:

Four fumbles.  Only one was lost, but still.  Sloppy.  I'm truly surprised by the amount of fumbles and turnovers so far this season.  Not sure what the deal is there.

For a while there I was all excited to shout to the rafters about how Jake Locker was nowhere hear the Heisman contender we'd been hearing about all these weeks.  And though his statline will say otherwise (289 yards, 4 TDs), a lot of those numbers had more to do with his receivers than him.  Namely, Jermaine Kearse, who turned two dump passes into long-yardage TDs.  Not trying to sound like sour grapes because the guy had a good game...it just wasn't the amazing performance I was expecting from a guy who was supposed to be the No. 1 pick in the NFL draft last season.

Tough, tough day for the secondary.  Whatever good vibes they were feeling from the Akron game went bye-bye real quick.  Somebody get Da'Mon Merkerson a frosty beverage cause the dude is feeling burnt.  What I couldn't quite grasp was how the receivers seemed to wide open in short-yardage situations all day long.  Whether it was a dump, a slant or a curl, every time Locker threw to one of his receivers, there didn't seem to be a guy in an SU jersey within five yards of him.

I'm glad Delone finally started to find his groove in the 2nd half.  Too bad it was just too late and the Orange had to revert to an all-out passing attack in order to salvage something.  Still, I get the feeling Carter is en route to one of the most unimpressive 1,000 yard seasons in history.  I don't blame him for all of it, the line doesn't seem to be opening up anything for him.  But I just get the sense he's destined to a season of 80-90 yard games and we'll all wonder how in the heck he got to 1,000 by the time we get to the BC game.

I haven't looked around to see if anyone is comparing this loss to 2007 as if they're exact same thing.  Yes, the scores were similar, especially if you discount the TD in garbage time.  But that's just on paper.  In reality, it was a bad loss but not a Hope Killer.  In the 2007 version, the Orange never even came up for air.  At least in this game they came out and took a lead while fighting to regain it for much of the day.  Plus, factor in the road game trip, the atmosphere in Husky Stadium and the talent gap and they're not the same loss.

LINKS AND VIDEOS OF INTEREST

Gaffes and more gaffes led to SU's 41-20 loss to Washington ... and Doug Marrone was not pleased...

Huskies bounce back with rout of Syracuse...Seattle Times