Media Day is underway, let's get to it.

We start with the best news of the day...Delone Carter will return and is expected to be in uniform for the Akron game.  BREATHE, SU FANS, BREATHE.

Marrone says Delone has already been punished by the team, university and judicial system, meaning he won't be suspended any games.

According to Big East football, throwing a guy threw a plate-glass window and punching a kid half your size warrant no game suspensions.  Fair enough.

Update:  According to Marrone, SU will have a 95-man roster, ten short of the NCAA mandate.  Hell, I'm actually surprised we can hit 95.  All things considered...

Update:  How did Marrone find out about Delone? From his Dad...an hour ago.  As for Averin Collier, the door isn't completely closed...he has until the first day of classes to work out whatever it is he needs to work out.  We'll see.

Update:  Courtesy of Syracuse.com, our first look at the players in uniform.  Bright pants! 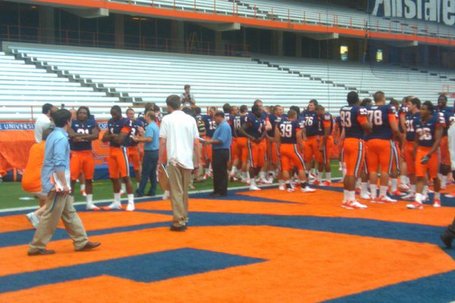 Update:  According to LB Derrell Smith, the fact that his cleats are orange makes him faster. You gonna argue with him?

Update:  Antwon Bailey was asked if today means the season is officially underway.  "Yeah, kinda...but not really." So...yes?  No?  What?

Update:  Syracuse.com's Katie Kramer asks the only question that matters...will the Chipotle Curse strike for SU Football this year?  He says "no."

Update:  The players are staying loose and posing for photos via D.O. Sports: 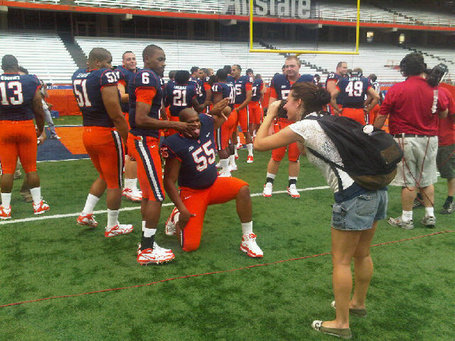 Update: Huggable Ryan Bartholomew...HE IS A BIG PERSON (via Syracuse.com) 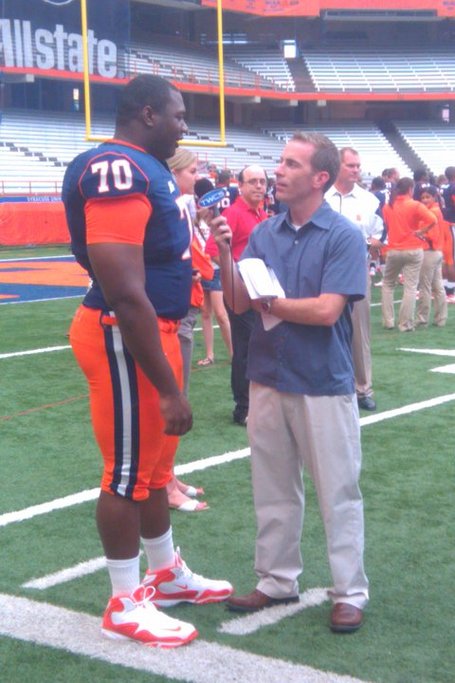 Update: #Shamarko says he "was a little kid" last year and he's our lock-down DB.  Oh and that "there's pressure but it's not pressure."  Agree!