Share All sharing options for: Doug Marrone's Wordle Of Success

The transcript from Doug Marrone's Monday presser is up.  You know what that means?  WORDLE CLOUD!!! 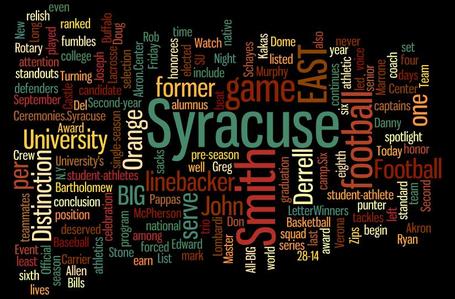 And because I know you're wondering...

We don’t get a lot of reports from Akron, as far as what they’re doing from an offensive and defensive standpoint.

You bank on that and that is what you’re playing, percentage, just like they’re doing for us because they don’t really know what we do from an offensive standpoint.

I knew we had someguys that could come in and run, I just wanted to see how they were from a physical and mental standpoint.

Shocker! Is this the end of tremendous as we know it?  We'll have to see.  But I leave you with this little anecdote from Marrone.  Somehow, someway, it always comes back to food.

"We’ve been getting ready to play Akron. We scrimmaged on Wednesday last week, we scrimmaged a lot of the other players, so it was fine. We did offense versus defense with a scoring system. We said that whoever won would get steaks on Thursday night while the loser ate hot dogs and hamburgers. It was a good way to break camp for us. When we came back we had a lot of academic orientation for the freshmen and there were a lot of things going on on campus, logistically, parking passes, books, etc. so we tried to stay away for a little bit until we began preparing for Akron. We tried to stay away a little bit knowing we have two and a half days to prepare for Akron. (smiling) Defense got the steaks."