Jim Boeheim is one of the greatest working actors alive today.  I think we can all agree on this.  The only reason he wasn't nominated for an Emmy this past weekend is because it's no longer fair to everyone else to let him compete.

Between his magical work in Blue Chips, his ability to dissolve into a character like he did in He Got Game and his many commercial masterpieces, there are few actors out there with the kind of gravitas that James Arthur Boeheim possesses.

Never has that been clearer than in the footage from the upcoming episode of Man vs. Food, which will premiere Wednesday, September 1st at 9pm ET on the Travel Channel.

In the clip below, Adam visits the famous Heid's in Liverpool.  He tries his hand at a Double Dog and has a "chance" encounter with Jim Boeheim.

Did you see it?  That moment of truth that only the finest actors can truly understand.  Where the actor disappears and the character emerges?  In case you missed it, here it is: 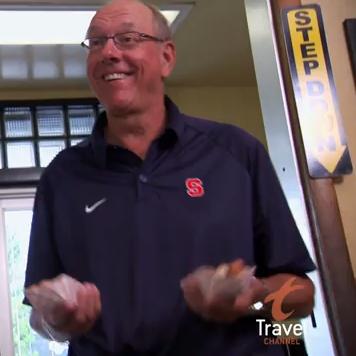 ACTING!  Not to be outdone, Adam Richman does some fine work himself, playing the Shocked TV Show Host: 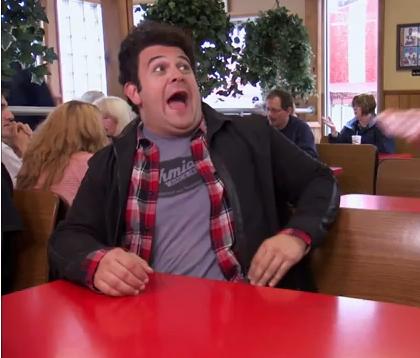 To be fair, that's exactly the same look any Syracuse fan would have on their face if Jim Boeheim suddenly appeared holding two Double Dogs.  Like he does every night in our dreams.