Big East Commish John Marinatto kicked things off with some of the more ludicrous and, sadly, expected comments of the day.

- Added the Big East conference is stronger today, in every way, than at any point in its history.

Here's more Marinatto, this time poo-pooing Jake Crouthamel, one of the guys who made this league.

"I was talking to someone from Syracuse yesterday and they said to me, 'Jake (Crouthamel, the former Orange athletic director) never thought this would survive,'" Marinatto said. "I love Jake, but he was always so negative. The presidents and athletic directors who have been there, who have experienced the plus side of this and felt the anguish of the 18 months (after the ACC expansion), don't want this thing to fail because they put so much time and energy into it. They are committed to do everything they can to make this thing survive."

Courtesy of The Orange Fizz fellas who are at Media Day, a slogan only a South Floridian living in North-Central Florida could love. 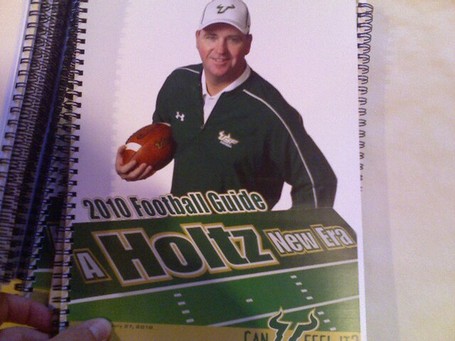 Update: From what I can tell, LobsterFest 2010 was a colossal failure.  Haven't heard anyone regale us with tales of crustacean destruction.  In fact, the only one that seems to have been taken down last night was West Virginia's Noel Devine...by the food.

The clams are fighting back, everyone.  The end is nigh.

Update: If you're looking for bombshells, you're not going to find them at BEMD.  This is probably the closest thing you'll get to it, courtesy of Adam Zagoria.  The Big East almost became The Big East-Ish 12.

The Big East explored the possibility of adding four Big 12 teams had the Big 12 disbanded in June, a Big East source told SNY.tv.

The Big East would have targeted Kansas, Kansas State, Iowa State and Missouri, swelling its ranks to 12 football teams and 20 basketball programs, the source said.

Who knows how legit this was. It might have just been a plan in someone's mind and not an actual in-motion event.  Still, it's on the table for us to wonder about what could have been.

Update: Via Tom Dienhart, there's a change to the way the Big East will announce injuries.

Big East will now announce injuries weekly like the NFL, listing players as Probable, Questionable, Doubtful or Out.

Update: And what of expansion? Obviously, the rumored Memphis move is not happening, nor was it even remotely close to happening.  Though it is to be noted that Marinatto was worried enough about the topic that forbade coaches from talking about it today.   Tom Dienhart dropped this ominous tweet during the day:

Big East commish says there are no plans in the works for expansion. Still, many speculate about Memphis joining. Stay tuned.

But who knows what that means.

Update: Doug Marrone sets his intentions for the season.

"I want to go to a bowl game," Marrone said. "That is the goal. Anything short of that is hard for me to say is good. We’re winning a lot of battles but those have to turn into wins on the football field for us. I know that there is a time clock on me from when I was hired. We have to get this team to a bowl game and back up to everyone’s expectations. There is a lot of pressure, yes, but it is something I chose and we all chose."

Update: Orange Fizz has some updates and thoughts on the Big East coaches and media day festivities.

Update: BE Media Day Photos courtesy of the CTPost... 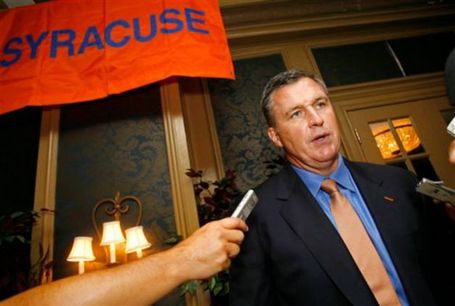 Update: It looks like six lobsters is the mark to beat from last night.  Pitt's Jon Baldwin and Greg Romeus both hit that mark.  And they had some fun doing it.

Update: Check out this nugget from the New York Post and tell me who you think said it.

The Pac-10's savvy decision to bring all 10 coaches and four of its star quarterbacks to New York last week struck a nerve with Big East coaches and athletic directors.

"This is our market, and we have to make sure we protect it," one AD told The Post.

Could that mean moving the league's media day from Newport to New York? That idea could be gathering steam.

Update: Marinatto talked today about how the only way to save the Big East is through a better TV deal.  He might actually have a point there.  But can they put together a deal worth staying for...and soon? 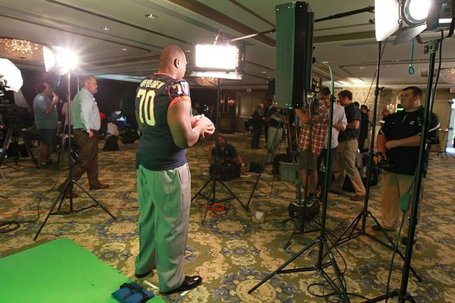