Share All sharing options for: Big East Expansion Rumors Throughout History: A Timeline

4500 B.C. - The first known Big East expansion rumor is reported to have been discovered in Tunisia.  This cave drawing is said to depict the migration of animals from the central and southern parts of Tunisia to the eastern section. 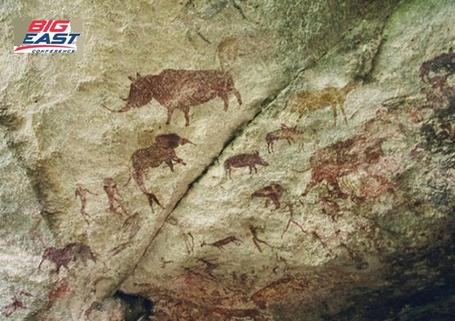 3000 BC - Certain translations of an early Bible text reveal a Big East-related quote.  "And Saint John spaketh to his people and he said, Look not to Canaan for God's expansion but to the Big East, for it shall come to pass."

1552 BC - Egyptian Pharoh Fredsmithenkamen has forty tigers and forty virgins shipped from the ancient city of Memphis to Big East officials as an offering for inclusion.

421 BC - According to Roman scriptures, Lucius Quinctius Cincinnatus is elected to the Roman Senate under a platform of empire growth, plebeian rights and gaining membership into the Big East.

119 BC - Ancient texts declare that, unhappy with the Sicilian City of Syracuse's standing in Greek culture, General Boeheimicus leads a coup d'etat that forces the Big East to invite them for membership.

1513 - According to a letter written by an unknown author, Ponce de Leon discovered Florida and immediately tried to gain membership in the Big East under the name "South Florida." He was denied under grounds that his location in Florida could not honestly be described as "South" and was told to reapply when he fixed the name.  He never did.

1633 - According to legend, a coalition of well-known pirates meet on the Eastern Carolina coast to discuss a treaty.  Led by Blackbeard, their aim was to gain acceptance into the Big East.  Before they could submit their proposal, Blackbeard had all of the other pirates killed, due to boredom. 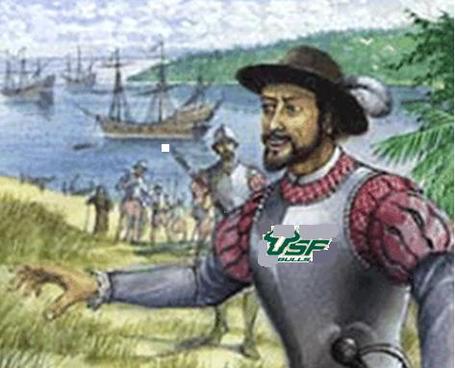 1714 - King Louis XIV sends a squad of his finest athletes to seek audience with King George I of England in regard to joining them in yearly competition.  They are resoundingly denied and told to return, per a local scribe, "from George's town  to Louis' ville and never to return."  This angered King Louis, who vows to make this happen until his death.

1814 - According to the Piscataway Picayune, Revolutionary war hero Henry Rutgers was said to value a Big East membership so much that he sacrificed his entire American football budget toward the endeavor.  He was quoted as saying, "Tis no matter, we will quickly gain a foothold in this sport and be among it's champions for many years to come. Of this I can be sure."

1876 - According to Native American legend in the Connecticut area, an angry golem was said to appear on a dark night, demanding entrance into the Big East.  It said that it would not rest until the "sun rises on the eagle that flies over the husky that runs East bigly."  Rumors still persist that the golem bears a striking resemblance to Jim Calhoun.

1835 - From the diary of a church official, it was said that Boston's Benedict Joseph Fenwick was so enamored with the Big East that "never shall a moment henceforth be known, that Boston College is not proud to call This Big Easte home." Fenwick also often mentioned taking a carriage to Providence once a month to "relieve myself in a manner most foul."

1910 - According to the Contra-Costa Times, Central Florida claims interest in joining the Big East but is denied under the conference's "No Florida Institutions With No Sense Of Direction" policy.  That policy would later be rescinded.

1979 - The Big East Conference is created, answering questions that have dogged historians for centuries.  Namely, what the hell is the Big East?

2006 to Present - Twitter is created and every local reporter, local sports radio host and sports blogger "confirms" a "report" that their "source" says one of many schools "is likely" to join the Big East "soon" and that we should be on the lookout for Big East expansion very, very, very soon.