Everyone Has A Great Time At Fan Fest...Except Doug Marrone

Share All sharing options for: Everyone Has A Great Time At Fan Fest...Except Doug Marrone

A fantastic time was had by those young and old at Syracuse had a grand time on Friday at the annual Fan Fest.  More than 1,550 people attended according to SU Athletics.  Most of them were there for the inflatable jumpies but a few of them stuck around long enough to watch the Syracuse football team run through practice and then sign autographs.

Check out some of the fans on hand for the festivities, especially taking note at 0:35 when Orange44's Brian Harrison gets absolutely cold-cocked by Otto The Orange while Danny Parkins looks on in horror.

In case you missed it the first time... 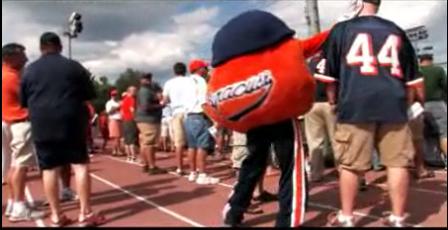 So like I said, everyone had a great time at Fan Fest.  Except one person...grumpy gus Doug Marrone.

Off to the far side of the field, standing for several minutes with an unhappy look on his face as he conferred with running backs coach Tyrone Wheatley and receivers coach Rob Moore, was head coach Doug Marrone. The big man soon made it clear that he was no fan of what he had just witnessed.

"I’m not happy with today’s practice on the offensive side of the ball," Marrone said. "Absolutely not. It just goes to show we have a long way to go."

HCDM's major issue?  The actual practice itself was terrible.  The Orange were not quite as physical as previous days.  The receivers and running backs took turns dropping balls.  The offense looks sloppy. And of course, Marrone sees it as a reflection on himself as the team leader, which means there's a crapton of windsprints ahead for the players.

Dave Rahme was equally perturbed with what he saw on the field Friday. He gave the defense a B+ for the game but only graded the offense at C-, which is bad news for Syracuse.  It doesn't matter how good the defense is, if the offense can't put points on the board it's a moot point.  Expect this to be the dominant storyline for the rest of camp.

Other news and notes:

Brian snapped some photos while at FF, including one of a still-limpy #Shamarko.

Mike C. wrote in to tell me this awesome tale:

After the practice session was over all of the fans were aloud to get player autographs. The first person I went up to was Charley Loeb. As I approached  him I asked " Can you please sign it "The Ridiculous Good Looking Charley Loeb?"  The response that I got was "WHAT!?!?!?!. Followed by all the linemen sitting next to him laughing uncontrollably. After he got over the shock of the question that I had just asked him, I explained the Blog, and what RGLCL stands for. I told him he needs to check it out which he said he would. That made my night.

Sadly, RGLCL did not sign the autograph as RGLCL.  Only CL.  Alas...

Some more fan observations over at SyracuseFan.com here and here.  Add your own in the comments if you attended.