The Ro*Tel Big-Ten-O'Meter Update: Jim Delany Will Have New York City, In This Life Or The Next

Share All sharing options for: The Ro*Tel Big-Ten-O'Meter Update: Jim Delany Will Have New York City, In This Life Or The Next 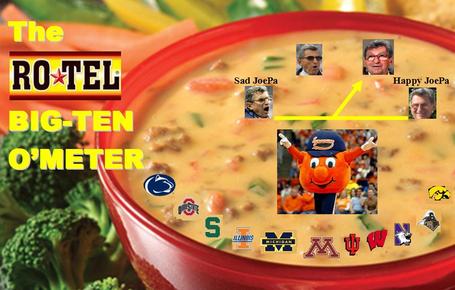 Wait, what? I thought we were done with all this?  The Big Ten O'Meter was supposed to have been retired, alongside the Syracuse Head Coach Sexy O'Meter and the International Bowl Quest-O-Meter.

While the Great NCAA Purge of 2010 is over, there's one thing we can take comfort in knowing.  It is temporary.  Because if we learned anything from Oliver Stone, it's that greed is good.  And now that the Big Ten will get a taste of that Nebraska money and Championship game money, it's only a matter of time before they make good of that initial threat to take a New York City-area team (or two).

"I hope it becomes more important."  Your vaguery will get you nowhere, sir.  Well, actually it will get you whatever you want.

For dramatic purposes, Delany even then takes a shot across the bow of the Pinstripe Bowl, which will feature a Big East team and a Big 12 team.

"My sense about that bowl was, 'It's great to be in New York but you better come with your 'A' game . . . because I don't think the New York market really responds to anything but the 'A' game."

I'd be upset if I didn't agree with him.
Big East commish Marinatto now must scramble all over again.  Not so much to save the Big East.  Instead, he's got to find out what kind of roses Delany likes and FAST.
H/T: Brian Bennett