To The Devo Goes The Spoils

Share All sharing options for: To The Devo Goes The Spoils

First up, is this not a classic Devo "yelling incoherently after doing something good" face? 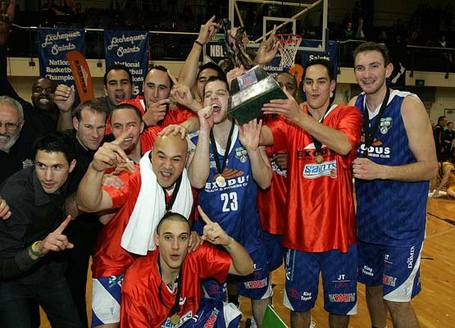 Saints' coach Pero Cameron has some kind words for his clutch shooter:

"Coaches see everything and it's an emotional rollercoaster. I want to talk about Devendorf, he came here out of not a very good situation, but he's got something solid behind him now.

"We love him. He's such an emotional character but he's been great for us."

And even Pistons coach Dean Vickerman had praise for the player he let get away.

"Eric thanked me for the opportunity to come to New Zealand, to take a chance on him. He was really appreciative of that. He's an emotional guy, but a good guy."

I also wanted to just take a moment and go back to the critical day when the Pistons cut Devendorf despite the fact that he was the team's leading scorer.

Davey said Pistons coach Dean Vickerman wanted a different type of point guard to run his side's offence rather than Devendorf, who netted 49 points on his debut for the two-time defending champs but struggled to make an impact in his most recent outings.

"Dean felt if we were to go all the way again for a three-peat and need to beat better teams we may have been exposed the way we were going."

How'd that work out for you, Dean?

Finally, Life has some good photos from the game, including wacky Saints fans, Devo giving himself the thumbs up, Devo (what else) screaming,  Devo screaming some more, Devo dousing his head coach with beer, Devo taking a forearm to the chops, some shots of the dejected Pistons,