Back To The Dome's Future

Share All sharing options for: Back To The Dome's Future

Can we all agree once and for all that, assuming we acquire the ability to travel back in time, we will do the following:

b) Beat the snot out of Pat Dye the night before the 1988 Sugar Bowl so that he is unable to coach the following day and therefore can't ruin Syracuse's best season in 30 years with one of the wussiest moves in the history of college football, nay, human history.

c) Go back and check on Hitler.  He's sneaky and could hold his breathe for a long time.

d) NOT step on any butterflies.  Seriously, you guys.

I feel like we need to establish these rules because clearly one of you has broken them already.  I know it wasn't me.  I traveled back in time once, to help 17-year-old me get a date to the prom with the girl of my dreams.  There were wacky occurrences, mistaken identities, screwball antics...and in the end I realized that it was the girl who was my best friend all along that I was supposed to end up with.  That's about it.

But you....whoever you are...you had other ideas.  If a move right out the Biff Tannen playbook, you tried to change the course of history.  Because you went back to the year 1930 and told them that the Carrier Dome was coming. 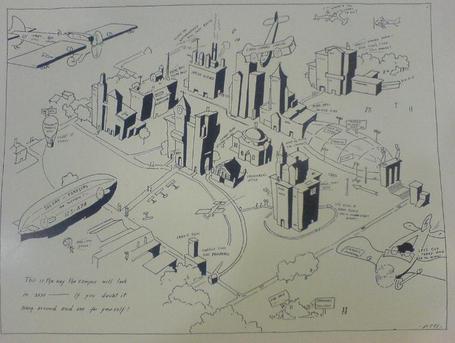 This is a drawing from 1930 and it depicts what Syracuse University's campus will look like in the year 2030.  And right where it should be, albeit a little looser in design than we're used to seeing it, is the Dome.  You can see a much bigger version of the map here.

Of course, I could be going about this all wrong.  Perhaps when this neer-do-well went back in time and told everyone about the impending building that would feature the name of a company that "conditions air" yet would not actually do so inside,  he or she set a chain of events in motion.  Maybe, just maybe, if this person didn't go back in time and plant the seed of Domination, be it 100% or even just 20%, the Dome would not have eventually been conceived some forty years later.

My guess? Jake Crouthamel.  Think about it.  He was very quiet.  A little too quiet. Was never in the spotlight.  Went unheard from for long periods of time.  Where do you think he was?  THE PAST...that's where.

According to the map there's a couple more things we can look forward to over the next 20 years.

The Cross-Campus Special: A bi-plane that takes students from one side of the campus to another.  Truthfully, I don't see why not.  Set up an airfield next to South Campus and then knock down the Sheraton to make another one right off campus.  Think of the time saved!

The Agriculture Building w/Rooftop Barn: Something tells me the Sky Barn was just Phase I of this monstrosity.

The "Shaving Incident At USF": Clearly that's some kind of foreshadowing coming from the Science & Forestry building.  An unknown shavee has been shaved for the umpteenth time this month.  Just as this happens, two bi-planes (Cross-Campus Specials?) crash in midair, sending debris down onto the precious USF quad.  The signs are all here, people.

Trees:  Apparently there are still trees on campus in 2030.  Gotta say, that's an upset.

My current job gives me access to the editions of Syracuse University’s yearbook, "The Onondagan," from 1890 to the present. I’m going to be perusing these little pieces of history and sharing with you whatever catches my eye or makes me laugh or tickles my fancy.

Syracuse University, like any institution of its pedigree, is steeped in history and tradition that largely goes unnoticed by the current generation of students. I think that in order to fully appreciate the university, we have to understand how it got that way. Let’s commemorate the pastimes that have fallen out of fashion, and maybe we’ll even find some good ones to bring back.

Plus people looked funny 100 years ago.

Best site ever?  Best site ever.  And if you're wondering what The Flour Rush is/was, this explains it.  Basically, it's a lot of people throwing ingredients at each other.  And a fire hose is prominently involved.  I can't imagine why this was discarded.