Syracuse Football No Longer Does It At Noon

Share All sharing options for: Syracuse Football No Longer Does It At Noon 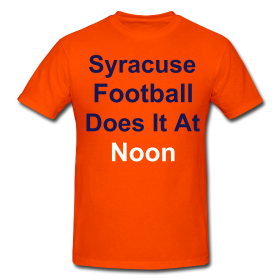 For the last few years, few teams have dominated the Saturday Noon EST slot the way Syracuse has.  Whether it was the Not-So-Big-East-Game-Of-The-Week or the ESPN2 Pam Ward Special, the Orange always had a knack for showing up at that most undesirable TV timeslot.

While many SU fans hope the results from this season's games are different than years past, at least they can take comfort in knowing that many of the timeslots the Orange will play in are already a little bit different.

Times for the Akron, Maine and Colgate games have been announced and there's nary a nooner among them.

The Orange football team kicks off the 2010 campaign at Akron on September 4. Kickoff is set for 6:00 p.m. and the game will be carried live on ESPN3. SU opens at home against Maine on September 18 at 7:15 p.m. in the Carrier Dome. The following week the Orange will host Colgate (September 25) with a 3:30 pm kick off time.

ESPN3, in case you missed it, is the new name for ESPN360.  So don't get excited and think you're going to find the Orange on your TV those weekends.

Of course, this doesn't mean the Orange are out of the nooner-woods yet.  There's still a lot of games to be scheduled and many of them will surely send SU back to the timeslot of doom.  That above t-shirt (which is available now!) might still come in handy.